special report: Govt under pressure to enforce 2011 'ban' in interests of trade

The campaign to ban Russian asbestos began years ago when the group T-Ban was formed to head the Thailand Ban Asbestos Network and protest the product to the Russian embassy in Bangkok. (File photo by Somchai Poomlard)

FTA Watch, the Thailand Ban Asbestos Network and a group of health academics monitoring the asbestos issue made the call to coincide with the visit of Russian Prime Minister Dmitry Medvedev to Thailand, starting Tuesday.

Russia is the world's leading asbestos exporter. Activists are worried Mr Medvedev will raise the cabinet resolution in 2011 to ban the use of chrysotile asbestos in Thai industry.

"Thailand has no reason to be afraid of a ban on asbestos. The government must express its stance that it will not allow asbestos to be used in the country,'' said Kannikar Kijtiwatchakul, FTA Watch coordinator.

Minister of Industry Chakramon Phasukavanich said recently his Russian counterpart, Denis Manturov, expressed concern about the ban during his visit to Thailand in January.

He came to discuss preparations for the sixth round of the Russian-Thai Joint Commission on Bilateral Cooperation (JCBC) to be held in Russia in the middle of this year.

"He asked Thailand to clarify its position on the measure to ban asbestos," said Mr Chakramon.

"Thailand and Russia cooperate on trade and economic matters under the JCBC. They have agreed to tackle trade problems and barriers, spur investment and smooth trade and investment. So, Thailand must be careful with its ban on asbestos," he said.

The Ministry of Commerce is concerned the ban could expose the government to legal suits launched by the business sector under the Investor-State Dispute Settlement (ISDS) procedure — an instrument of public international law that grants an investor the right to use dispute settlement proceedings against a foreign government. 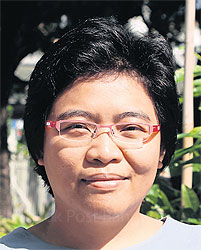 "We have a fair policy to protect the public benefit but some officials speak as if they don't understand the policy," Ms Kannikar said, referring to the government's position on asbestos.

Thai civic representatives are worried Mr Medvedev will pressure Thai authorities to buy chrysotile asbestos from Russia. They are also worried the government, succumbing to such pressure, will drag its feet on implementing the 2011 ban.

The ban was approved following a Public Health Ministry study which concluded that chrysotile asbestos is detrimental to human health. However, a number of processes have to be undertaken before the ban becomes effective.

Russia is one of Thailand's major export markets for raw meat and the country recently expressed an interest in buying rubber and investing in Thai infrastructure. The Ministry of Commerce is concerned a ban on asbestos could affect overall bilateral trade and investment.

The Public Health Ministry was recently asked to study the health impacts of chrysotile asbestos.

"Even though few cases have been confirmed in Thailand, the evidence clearly proves that all types of asbestos cause health impacts on humans," he said.

The study, which was conducted by Dr Surasak, was delayed by debate between supporters and critics of the ban.

But it was finally completed in early 2014 with the conclusion that chrysotile asbestos is associated with lung cancer, mesothelioma and asbestosis cases in Thailand.

As of June 2013, the study found 12 confirmed cases, of which half were related to exposure to asbestos.

Two of the cases involved male workers, 75 and 51 years old, who worked in cement fibre roof tile factories for more than 20 years. They died less than six months after being diagnosed with mesothelioma, according to the study.

Health academics believe there are likely to be more than the 12 cases recorded in the study of asbestos-related diseases.

Health-monitoring systems in the past were not effective enough to follow up on asbestos-related cases. The disease can take many years to develop, and smoking can mislead its diagnosis.

If the use of asbestos is banned today, it will help lead to a reduction of 500 mesothelioma cases and 3,000 lung cancer cases a year by 2050, and save 2.7 billion baht in healthcare expenses, the Asian Ban Asbestos Network said last year.

According to the World Health Organisation "Chrysotile Asbestos" report released in 2014, at least 107,000 people die each year from asbestos-related lung cancer, mesothelioma and asbestosis, resulting from occupational exposure.

The WHO has urged an end to all types of asbestos to eliminate asbestos-related disease.

So far, more than 50 countries, including all members of the European Union (EU), have banned asbestos.

Substitute materials include alternative types of fibre materials and non-fibrous material such as unplasticised polyvinyl chloride and sheet metal.

"We can develop substitute products. We shouldn't wait until the death toll from this disease rises," said Vithaya Kulsomboon, director of Chulalongkorn University's Social Research Institute.

According to his survey, cement fibre tiles, with or without chrysotile, sell for much the same price, he said.

Last December, the cabinet decided to set up a committee under Deputy Prime Minister MR Pridiyathorn Devakula to study the impacts of chrysotile asbestos, despite the Public Health Ministry study completed earlier.

The committee was set up after the ministry sent a proposal to the cabinet to phase out the use and production of asbestos.

But the cabinet on Dec 23 eventually rejected the proposal to outlaw the material, saying there was not enough evidence of asbestos-related disease in Thailand.

The cabinet rejection also invalidated an Industry Ministry proposal to phase out asbestos in industrial products by 2020.

The delay in banning asbestos was also put down to the economic burden of enforcing a ban, which King Mongkut's Institute of Technology Ladkrabang estimated in 2013 to be more than 460 billion baht.

Variations of this proposal have been put to successive cabinets since 2011, but never enforced.