Prayut reaches out to Moscow

Thailand and Russia pledged to boost cooperation, emphasising the importance of close ties and understanding in the face of global challenges during a joint press conference between Prime Minister Prayut Chan-o-cha and his Russian counterpart Dmitry Medvedev yesterday. 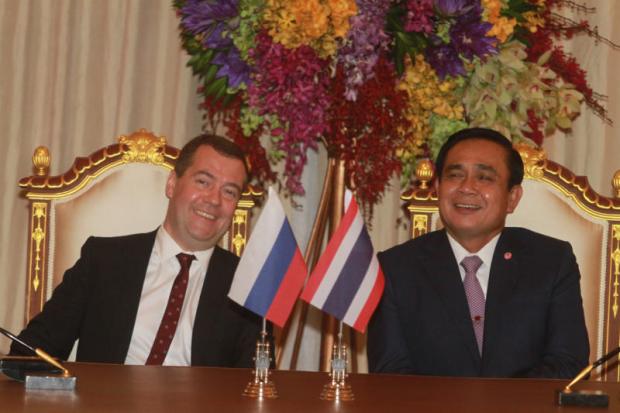 The first Russian premier to visit Thailand since the collapse of the Soviet Union, Mr Medvedev put trade and investment issues at the top of Wednesday's agenda, while 10 memorandums of understanding (MOUs) were signed between government agencies and the private sector.

Gen Prayut told the joint press conference that relations between Thailand and Russia are at a crucial stage.

"When a friend is in trouble, moral support from allies is needed. Russia still chooses to be friends with Thailand today and we will ensure the bond of friendship remains tight," Gen Prayut said.

He thanked Mr Medvedev for his understanding about Thai political developments and vowed he would strengthen ties between the two countries.

"Mutual interests will be shared between Thailand and Russia and there should be no suspicion between us," Gen Prayut said.

The two premiers said Thailand and Russia intend to boost trade volume to US$10 billion (325.7 billion baht) next year, jumping from US$5 billion in 2014.

"Trade barriers or obstacles that might slow economic growth between us will be removed," Mr Medvedev said.

According to Gen Prayut, Russia agreed to import various products from Thailand, such as rice, fruit, pork, seafood and rubber.

In order to celebrate 120 years of diplomatic relations between the two countries in 2017, a Russian Cultural Centre will be established in Bangkok.

Mr Medvedev said that tourism is what keeps Thailand and Russia close to each other.

"Russians travel to Thailand very often because it is their favourite holiday destination."

The number of flights between the two countries will be increased to promote tourism, Mr Medvedev said.

However, Thai Airways recently suspended flights to Moscow as part of the company's financial overhaul plan.

A total of 1.7 million Russian tourists visited Thailand last year and the number is on the rise, he said.

Mr Medvedev asked the Thai government to look after Russian citizens either residing in or travelling in Thailand, especially during special circumstances.

The two leaders witnessed the signing of 10 MOUs at Government House.

A ban on chrysotile asbestos was not mentioned by either side, even though Thai civic groups had earlier expressed concern Russia might raise the issue. Russia is a major exporter of the substance, which civic groups have urged the government to ban due to health concerns.