In this January 2014 file photo, then-US special representative for North Korea policy ambassador Glyn Davies gestures as he speaks to reporters at a hotel in Beijing. President Barack Obama has nominated Mr Davies as ambassador to Thailand. (AP photo)

WASHINGTON – Glyn Davies, a former US envoy for North Korean policy, was nominated by President Barack Obama as ambassador to Thailand to fill a position vacant for six months.

The White House announced the nomination on Monday. The Senate will have to approve the appointment. Many of Obama's nominations, from judges to ambassadors, have been delayed by gridlock in the body, which has been controlled by Republicans since January. 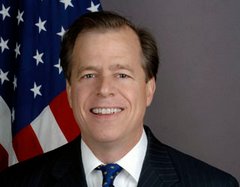 Davies's nomination comes amid difficult relations between the US and Thailand following the military coup against the elected government of Prime Minister Yingluck Shinawatra in May last year. The Obama administration has criticized the military takeover, cut off some aid and called for a swift return to elections.

There are also tensions on the human rights front. The US downgraded Thailand last June to the lowest possible rating in its annual trafficking-in-persons report, saying it didn't meet the minimum standard for eliminating the crime. The government has said it has "intensified" its efforts to end the use of forced labour.

Mr Davies is a career member of the US foreign service and is now a senior adviser in the Bureau of East Asian and Pacific Affairs at the Department of State. Prior to that he was special representative for North Korea policy from 2012 to 2014.

He served as the US envoy to the United Nations and the International Atomic Energy Agency in Vienna from 2009 to 2012.

Mr Davies will replace Kristie Kenney, who became deputy assistant secretary for public diplomacy and public affairs in the East Asian and Pacific affairs bureau in November, after leaving the Bangkok post.

Thailand could find itself at the forefront of the metaverse frontier if developers receive proper support from industry collaboration and the government, according to two creators.