Life is back to normal at the tourist-friendly island, as the military interrogates a security guard and investigates an alleged bomb plot hatched by Koh Samui Muslims. (Bangkok Post Photo by Thanarak Khunton)

One of three security guards from the deep South is suspected of being involved in the Central Samui Festival bombing last Friday which injured seven people, a senior military officer said Thursday.

Maj Gen Kueakul Intaranachak, commander of the Surat Thani Military District, said five security guards on duty on the night of the explosion are currently being held for questioning at Vibhavadi Rangsit military camp in Surat Thani's Muang district.

Of the five guards, three hail from the deep South and were detained shortly after the explosion.

Following questioning, one of the three guards was suspected of being involved in the bombing, Maj Gen Kueakul said.

He said all five guards cooperated fully and provided useful information for the investigation.

Under Section 44 of the interim constitution, the military can detain the guards for up to seven days, after which they will hand them over to police for further inquiries, Maj Gen Kueakul said. 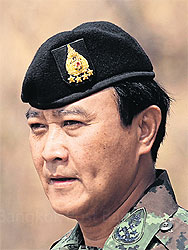 Udomdej: Not ruling out any motive yet

Police believe the bombers may have plotted the attack from within a Muslim community on Samui island where people from the three southernmost provinces stay, a police source said.

The seven people injured included a 12-year-old Italian girl. About 10 vehicles were damaged in the explosion.

About the same time as the blast, a fire broke out at the Surat Thani Cooperative in Punpin district, destroying a food court though police later said there was no connection between the bomb and the fire.

Deputy Defence Minister and army chief Udomdej Sitabutr rejected speculation that the government plotted the Samui car bombing to justify the use of Section 44.

Gen Udomdej, who is also secretary-general of the National Council for Peace and Order, said neither the government or the NCPO would discredit themselves by stooping so low as to plan a bomb blast.

He was responding to conjecture by government critics that the explosion might have been the work of the government to validate its invocation of Section 44. Asked about the investigation's progress, Gen Udomdej said the government has not yet ruled out any motive behind the explosion.

The investigation is still ongoing, he said.

Gen Udomdej also voiced doubts that the explosion was the work of southern insurgents seeking to expand unrest outside the three southernmost provinces of Yala, Pattani and Narathiwat.

Authorities are working on three main theories, the first of which is that southern insurgents are expanding terrorist activities to other areas.

The other two hypotheses are personal conflicts between the shopping mall bosses and former employees, and political violence.

Evidence suggested the Samui bombers might be linked to insurgent groups in the South because the pickup truck used in the attack was stolen from Yala.

On Wednesday, national police chief Somyot Pumpanmuang revealed that several well-known southern politicians are suspected of involvement in the blasts.

Evidence has come to light that politicians supported those who planted the bomb, Pol Gen Somyot said.