River waits for the world’s help

Villagers work hard to save their livelihoods

A sanctuary for wildlife and sustenance, the Lower Songkhram River Basin (LSRB) in Nakhon Phanom faces man-made threats like many major ecological hubs around the country. But it's the teasing possibility of a decision that will be made half a world away which could save it.

For centuries, the Songkhram River has provided for the residents of the upper Northeast and nurtured the ecology on which their livelihood depends.

Now, the life-sustaining basin is under threat, manifested in the shape of large-scale commercial farms and large dams in the adjacent Mekong River. Local residents are already feeling the brunt.

Surachai Narongsilp migrated to Tha Bo village in Si Songkhram district of Nakhon Phanom as a young man to marry his sweetheart.

Back then, in 1973, their home was blessed with the bounty of the Songkhram River — a tributary of the mighty Mekong River that was free of dams and which runs 420 kilometres through five upper northeastern provinces.

At 61, the community leader recalls how it was easy to hunt for food or collect it from the water and the peat swamp, known in the local dialect as "Paa Boong Paa Thaam".

“Just a short while after I arrived in the village, things started to change,” he said.

That was when a private company approached villagers and offered to rent their farms to grow produce.

Many residents were handed company papers peppered with complicated legal jargon to sign. Little did they know, but they actually signed over their ownership of the farms to the company.

From 1978, the company introduced commercial tomato and corn plantations on the land they purportedly rented. To clear the land, the peat swamp had to go and the water-hungry factories left the river depleted.

Widespread commercial farms sprouted along the Songkhram River after successive governments implemented a policy to encourage industrial crops which threatened to cause over-consumption of water and intensive use of chemicals that affect water quality in the river.

Extensive farming led the government in 1989 to propose a dam eight kilometres from where the river meets the Mekong.

The dam project, intended for harnessing water for farming, was finally suspended in 2001 following a protest by local residents who feared social and environmental destruction from the dam.

But that’s not the end of the story.

“Rich natural resources are rare now. Our communities will be living on borrowed time if we don’t do something about [preserving the river basin],” Mr Surachai said.

Despite the intrusions, downstream of the Songkhram River is still one of Thailand’s few abundant freshwater wetlands nominated for designation as a Ramsar site — wetlands of international importance designated under the Ramsar Convention. The Ramsar office is in Gland, Switzerland.

The convention is an intergovernmental treaty that provides the framework for national action and international cooperation for the conservation and wise use of wetlands and their resources.

Between 2003 and 2004, local residents from four villages received aid from the World Conservation Union and the South East Asia River Network to conduct community-based research called “Thai Baan”, which found the LSRB was rich in natural resources.

The World Wide Fund for Nature Thailand has helped the government to prepare the paperwork for the nomination of the LSRB as a Ramsar site since last year.

“We hope that certain conditions which must be satisfied in the application for the Ramsar recognition will compel Thai authorities to help us save our home,” LSRB Committee chief Suriya Kotamee said.

On World Wetland Day on Feb 2, HSBC Bank joined WWF to launch a project that will last two years and four months and look into ways to build a strong application for LSRB to be declared a Ramsar site.

Currently, on-site information is being gathered by related agencies from surveys of the LSRB areas. By the end of next year, data and documentation will be provided and put to public hearings before everything is compiled and appended to an application which the government can pick up and present to the Ramsar office.

“We see that it’s urgent to propose the LSRB as a Ramsar site. It would help curb the degradation of natural resources and encourage sustainable management of the basin,” said Yanyong Sricharoen, landscape manager of WWF’s Community Management of Wetlands in the Mekong River Basin Project.

The LSRB has several oxbow-shaped lakes and marshlands with unique seasonal ebbs and flows.

During the rainy season, the Songkhram River can rise by up to eight metres, induced by the Mekong’s high tide.

The condition creates a wide expanse of flooded marshland for about several months from June through to October. It is when migratory fish from the Mekong arrive to lay their eggs in the inundated Paa Boong Paa Thaam which provides a perfect spawning ground.

At other times of year, Paa Boong Paa Thaam dries up in the summer and becomes a habitat for food plants and animals. More than 183 fish species, 102 birds and 228 native plants are found in the area.

Local villagers depend on the flooding phenomenon for food all year round. Most households in the villages around the marshland make a living from fishing during the season

However, decades of overuse of natural resources and the ensuing conflict from the issue between state and communities have left villagers in a desperate situation.

Local villagers observed a rapid disappearance of swamp forest in the 1980s and food from mother nature is now scarce.

On one cool morning, the LSRB Committee took visitors on fishing boats to see first-hand the Songkhram River’s offer of a livelihood that is in decline, and the changing landscape.

The swamp forest, which is visibly less dense, is set against the backdrop of expanding rice fields, many of which are owned by residents who have migrated to the villages.

Villagers are out fishing. Some string lines of hooks across the water and drop fish traps and square dip nets.

The fishing methods vary but fish stocks are hard to come by these days.

“I don’t catch many fish. I think it’s because there are a lot of traps out there and also because of the deterioration of Paa Boong Paa Thaam,” said Ruay Tongwan, 52, a local fisherman.

Others noted an unusual pattern of water flow as the water level fluctuates rather oddly. They believe it has something to do with dams built on the upstream Mekong River in China and the catch in the Songkhram River basin will lessen as fish may not be able to adjust to the swings in tides.

“The seasonal flood level [in the marshland] has declined in recent years. Maybe that’s because there is not enough water from the Mekong River to reach deep into the interior of the Songkhram River,” said Tan Si-ngoy, 62, of Tha Khong village in Si Songkhram district of Nakhon Phanom.

“The water has changed since the Mekong River was dammed,” Mr Tan said.

Already public participation necessary to seek Ramsar status and return ecological fertility to the basin is being forged, although it could do with greater political will.

Aware of the declining natural resources, villagers have established a conservation group to educate other locals, especially the younger generation, about the importance of having the river and keeping its natural
richness.

“The river is a supermarket for us,” said LSRB Committee chief Suriya.

“We’ve tried to convince the authorities to appreciate the value of natural resources.

"But we haven't been given much support.

"So we have turned to empowering ourselves to protect our home.”

The villagers have designated the boundary for aqua wildlife preservation zones — such as Wang Pla and Wang Hoi — for natural breeding and habitats for fish and shellfish.

Hunting is prohibited within 500 metres of the zones to allow animals to breed.

“It will spell major trouble for the wildlife and livelihoods of local people if the Songkhram River loses its vitality,” Mr Suriya said. Traditional fish traps called ‘tong’ hang along the Songkhram River. Local fishermen use them to catch fish during high tide. 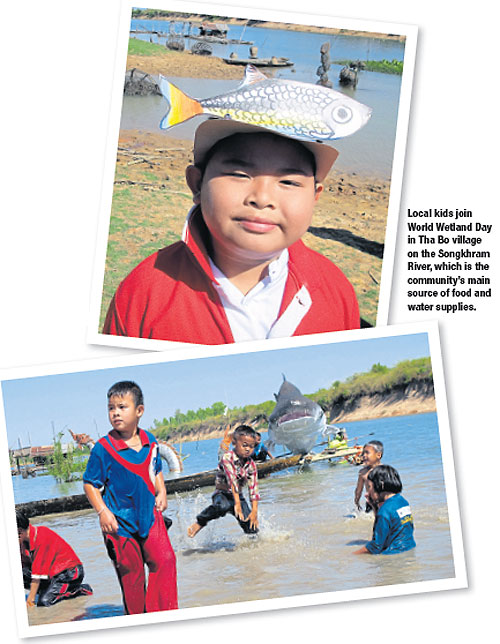 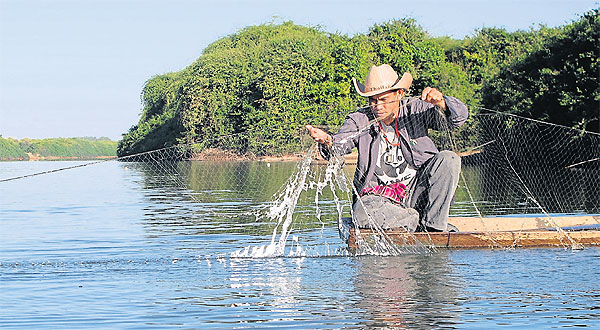 Suriya Kotamee, chief of the Lower Songkhram River Basin Committee, pulls in a net. He and other fishermen complain they catch fewer fish these days.