Ufun may have cheated victims of B38bn in Thailand
Thailand
General

Assistant police chief Suwira Songmeta, right, elaborates on the billions of baht in damages caused by the Ufun pyramid scheme at a press conference in Bangkok on Tuesday. He is accompanied by Sihanat Prayoonrat, secretary-general of the Anti-Money Laundering Office. (Photo by Somchai Poomlard)

The transnational online sales company Ufun may have cheated up to 120,000 members in Thailand out of about 38 billion baht in total through its alleged pyramid scheme, police said on Tuesday.

He urged people who were victims of the pyramid scheme to file complaints with police. Any monies recovered would be distributed on a first come, first served basis. So far about 110 people had filed complaints.

About 400 police officers were assigned to receive complaints nationwide and people could file their  details and relevant information at police stations and via the hotline number 1599, Pol Lt Gen Suwira said.

He also said police seized assets worth 250 million baht from Ufun Store Co, and they included 16 million baht in cash, gold ornaments and luxury cars. The assets could be put up for auction soon to raise money to recompense the victims, the assistant police chief said.

He urged Thai reporters to attend press conferences on the issue in Malaysia to acquire information for Thai police. He said there were free air tickets for the purpose. He quoted Malaysian police as reporting that a large number of Malaysians invested in the pyramid scheme operated by Ufun in Thailand.

Suriya Singhakamol, director of the Bureau of Technology and Cyber Crime, said 20 Thai and foreign suspects were facing arrest warrants. They were key founders of the pyramid scheme and each of them had changed their names 3-5 times.

Investigators also found that Ufun Store set up 3-4 subsidiaries to expand its fraudulent activities. Malaysians had initiated the scam and were among those facing arrest warrants, Pol Maj Suriya said. 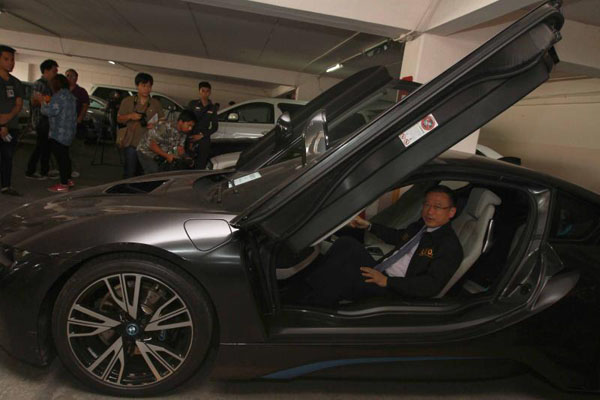 Luxury cars seized from Ufun Store are handed over to the Anti-Money Laundering Office on Tuesday. (Photo by Somchai Poomlard)