At least eight Myanmar workers died and 18 others were critically injured when a pickup truck packed with factory employees hit a concrete barrier in Samut Sakhon’s Muang district on Monday night, police said. 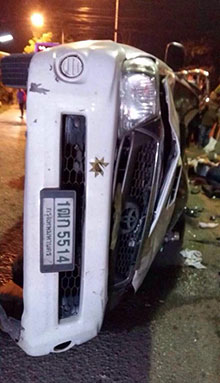 This pickup truck packed with Myanmar workers overturned when it hit a concrete barrier in Samut Sakhon, killing eight passengers and seriously injuring 18 others on Monday night. (Photo by facebook: We love Samut Sakhon charity foundation)

Police and rescue workers sent to the scene found an overturned Toyota pickup truck with a Bangkok licence plate.

Five workers, all Myanmar nationals, were found dead at the spot and twenty-one others injured. All 21 injured workers were rushed to four hospitals, but five were later pronounced dead, Thai media reported on Tuesday.

The Myanmar driver, identified as Zaw-ou, 33, told police  he had been hired by TP Food Co, a seafood factory in Samut Sakhon, to transport its workers. He was carrying 26 Myanmar workers to their living quarters in a nearby area when the crash occurred.

As he was about to make a U-turn under the bridge, a pickup truck suddenly approached from the opposite direction. He panicked, fearing an accident, and lost control of his vehicle, which crashed into the concrete barrier and overturned.

The force of the crash threw the workers from the vehicle.

Thai media reported that all 18 injured workers still being treated at hospitals remained in critical condition.