Police: 20 more corpses could be found

Rescue workers and forensic officials inspect the site of a mass grave uncovered at an abandoned jungle camp in the Sadao district of Songkhla province bordering Malaysia on May 1. (AFP photo)

SONGKHLA - More than 30 bodies were discovered Friday in shallow graves at a human-trafficking camp near the Malaysian border with the national police chief saying 20 more could be found.

Pol Gen Somyot Pumpunmuang said he had received reports from Songkhla provincial police and soldiers of 50 graves at the remote camp located in a mountainous jungle section of tambon Padang Besar in Songkhla's Sadao district.

The dead are suspected to be Rohingya Muslim refugees from Myanmar and Bangladesh who starved to death or died of disease while awaiting payment of ransoms to be smuggled into Malaysia by a trafficking gang comprising Thai, Myanmar and Malaysian nationals.

Some of the bodies were buried, while others were covered with clothing and blankets at a shelter in the mountains of southern Songkla province, Pol Col Weerasant Tharnpiem told The Associated Press.

"There are 32 graves, four bodies have now been exhumed and are on their way... to hospital to for an autopsy," Sathit Thamsuwan a rescue worker, who was at the scene soon after the site was found, told assembled media around 3.30pm.

Reuters reported that two more bodies were left to rot out in the open above ground. 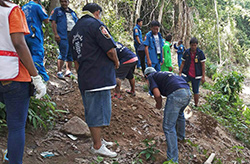 Rescue workers and forensic officials inspect the site of a mass grave uncovered at an abandoned jungle camp in the Sadao district of Songkhla province bordering Malaysia on May 1. (AFP photo)

By late afternoon, the exhumations had stopped pending the arrival of forensic teams.

"The bodies were all decayed," he said, adding a single man from Bangladesh survived and is being treated at a hospital in nearby Padang Besar, Malaysia. The hospital confirmed the extremely emaciated Bangladeshi man had survived and was in stable condition.

Pol Gen Somyot said the smugglers were believed to have abandoned the sick man when they moved Rohingya migrants across the border into Malaysia two days ago.

Officials were alerted to the graves by a local man who stumbled upon them while foraging for mushrooms. Mr Sathit, of the Maikom Sadan municipal rescue service, told the Phuketwan website that authorities had to trek 50 minutes up a hill to reach them.

The corpses have to be carried out, as vehicles cannot reach the grave sites.

Reports quoted investigators as saying that the camp held 200-300 Rohingya migrants. Pol Gen Somyot, however, described the site as a virtual "prison camp" where migrants were held in makeshift bamboo cells.

"There are 32 places that look like graves and whether there is one body or several bodies in those graves, we will we have to wait and see," he was quoted as saying by AFP.

Pol Gen Aek Angsananont, the deputy national police chief, said the camp, covering about one rai of land, had a bedroom and a canteen. It is only 300 metres from the northern Malaysian state of Perlis. The camp is very close to the border and authorities are trying to determine if it resides on Thai or Malaysian soil.

"This location helps traffickers transport the migrants at any time and it is difficult for officers to arrest them," he said.

Traffickers usually set up camps in random locations to avoid authorities, then leave behind any sick or dead when threatened with detection.

Authorities said they suspect there could be around 50 bodies buried at the camp. 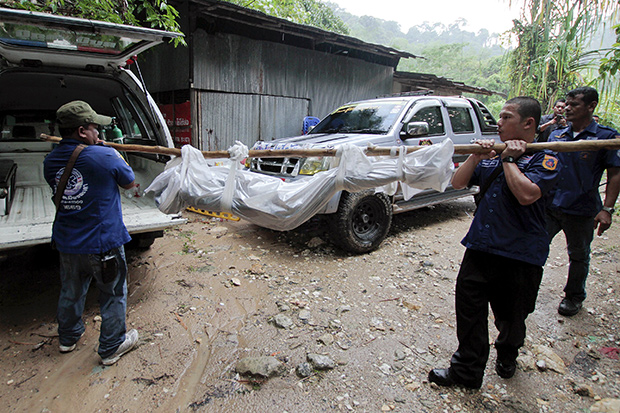 Rescue workers transport one of the bodies found at an abandoned camp in Songkhla province May 1. (Reuters photo)

The discovery, the first of its kind in Thailand, highlights the brutal nature of the trafficking trade in which hundreds are believed to have died in camps or at sea, Reuters reported.

Every year, thousands of Rohingya and Bangladeshi boat people arrive in Thailand, brought by smugglers. Many are taken by road to camps in the jungle, where traffickers demand a ransom to smuggle them south across the border to Malaysia.

Last year, Thailand was downgraded to the lowest tier on the US State Department's influential Trafficking in Persons report, which annually ranks countries by their anti-trafficking effort