Three men were killed and six others injured when a car rammed into a group of cyclists in Chiang Mai this morning. (Photos by Cheewin Sattha)

Three men were killed and six others injured when a car rammed into a group of cyclists on the Chiang Mai-Chiang Rai highway in Chiang Mai's Doi Saket district on Sunday morning, police said.

Pol Maj Suriyan Chansai, an investigator at Doi Saket police station, said the incident occurred at about 5.45am on Highway 118.

Witnesses told police that while a group of about 30 cyclists from San Sai Cycling Club in Chiang Mai were pedalling past kilometre marker No.8 on an out-bound lane to Chiang Rai, a Toyota Yaris car, which was travelling at high speed, rammed into the group from the rear.

Six cyclists were injured, two of them seriously. They were admitted to Doi Saket Hospital.

Also injured in the incident was the female driver of the Yaris, Phatchuda Chairuean, 24, a third-year student of a local university.

Ms Phatchuda claimed she fell asleep behind the wheel but Pol Maj Suriyan said a medical test found she had 67  milligrammes of alcohol in her blood, exceeding the 50 milligrammes limit.

Ms Phatchuda will be charged drunk driving as well as reckless driving causing death and injury. 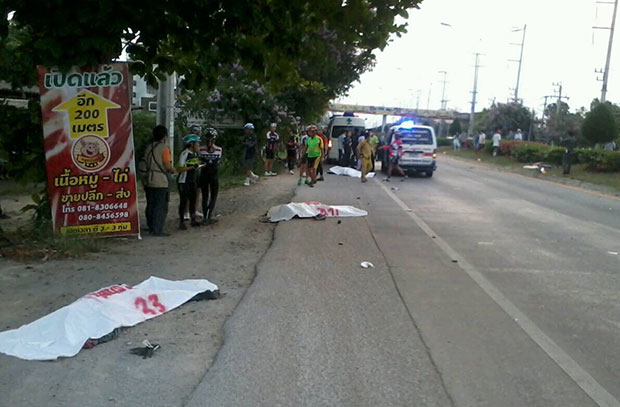