Networks are detaining Rohingya in other provinces, in Myanmar and in Malaysia

Songkhla villagers provide a Muslim funeral and burial for unknown Rohingya found in mass graves left behind by traffickers in the South. (Reuters photo)

The massive crackdown on human trafficking networks in Padang Besar is a good sign, reflecting the government is serious about dealing with the problem.

However, the illegal activities in Songkhla are just the tip of the iceberg, activists say.

Since May 1, when the first mass graves of a Rohingya detention camp were uncovered in the jungles around Khao Kheow mountain in Padang Besar, police have issued arrest warrants for 49 suspects. Of these, 15 have been arrested.

Those in police detention include influential figures such as local politicians. Among them are provincial councilor Arbu Ha-ura, mayor of Padang Besar municipality Banjong Phongphol, and his deputy Prasit Lemleh.

Several other local officials, including two police officers, a village headman and two assistants, as well as a major tourism business operator are also among the suspects.

Despite these arrests, activists working on Rohingya issues have noted the trafficking epidemic goes far beyond the situation in Padang Besar.

"The crackdown has yet to uproot all trafficking networks," said human rights lawyer Surapong Kongchantuk from the Lawyers Council of Thailand.

Activists have called on the government to suppress marine trafficking activities, claiming they are the root of the problem. (Story continues after the infographic) 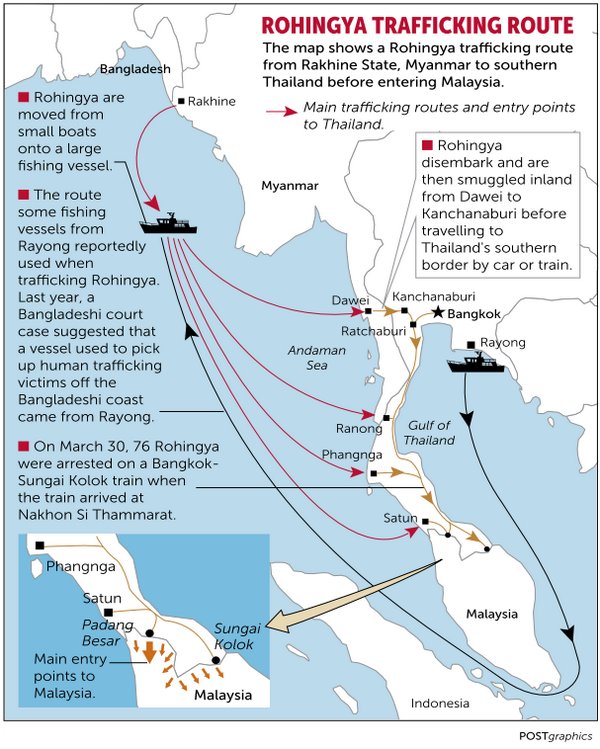 "Transportation of migrants by sea is one of the key steps of human trafficking. If the government cannot end the activities, this chronic problem cannot be solved," Mr Surapong said. The main culprits are those who send ships from Rayong, Ranong and Phangnga to collect migrants from the Andaman Sea and take them back to Thai shores, he said.

"We hope that government authorities will expand their crackdown to other provinces where the trafficking of migrants is being reported," Mr Surapong said.

Two wooden boats carrying nearly 600 Rohingya washed up on the shore of Aceh on Sunday. Nearly 100 women and dozens of children were among those rescued by fishermen from their drifting boats.

Indonesian officials said the migrants had "left Thailand" a week ago. Some died during the ordeal, and others were in bad shape and needed medical attention. More details here.

Reports of migrants being trafficked have come from several districts of Ranong province, Sungai Kolok district in Narathiwat, and Khura Buri disrict in Phangnga.

Suriyan Kanchanasilp, Ranong's governor, said the first reported instance of migrant smuggling in Ranong was in 1998 when 104 Rohingya were rounded up. Since then, the number of illegal immigrants has continued to rise.

Migrants arriving by boat to Thailand are not only Rohingya from Myanmar's Rakhine State, but also Bangladeshis. Many of them have to live for weeks at sea before coming ashore to Thailand.

Sources say Thais are involved with trafficking operations from the outset. There have been reports that some Thai ships are used to traffic Rohingya.

On Feb 11 last year, five Thais were arrested on a ship in Bangladeshi waters and charged with human trafficking. A Bangladeshi investigation suggests the ship left from Rayong for Bangladesh to collect migrants to take to Thailand. The case has not yet gone to trial in Bangladesh, according to Mr Surapong.

The long mountain ranges along Thailand's Andaman coast are home to several jungle camps set up by traffickers to detain desperate boat people.

A Rohingya source said there are members of trafficking networks in Malaysia, Thailand and Myanmar.

After coming ashore to Thailand, if tight security hampers migrants' passage to Malaysia, brokers detain them at the jungle camps until it is "safe" for them to cross the border.

During the migrants' detention in the jungle camps, traffickers demand additional payments from their relatives, claiming the extra funds would be used to care for the victims.

In many cases, brokers in Thailand request 30,000 baht from relatives, but brokers in Rakhine often double the sum to 60,000 baht.

After the relatives pay the additional sums to brokers via an underground money transfer system known as poey kuan, some brokers refuse to pass the money onto the camp operator or local trafficker who controls the camp. This means the victim is detained until the camp operator receives the money.

In several cases, instead of taking migrants to Malaysia, brokers cooperate with local traffickers and detain the victims to receive ransoms from relatives. Those who try to flee but are recaptured are severely punished or killed, to scare other detainees.

"Not many Rohingya people in the camps were killed by traffickers. Most of the deaths resulted from illness, starvation and poor sanitation," said the source.

Some groups of Rohingya built their own ships to travel to Thailand, the source added.

Women receive worse treatment than men in the jungle camps.

"I saw more than 100 die while I was in the camp," Kala, 25, a female Rohingya, told the Bangkok Post via a translator. She had been detained in a Padang Besar jungle camp for five months.

"The first day I arrived, two women died. Last month, three women died. "Some women were raped when their relatives could not pay their ransom," Ms Kala said.

She admitted she voluntarily took a boat from Myanmar because she wanted to find work in Malaysia.

She paid a broker 3,000 Malaysia ringgit (28,000 baht) and her brother, who is now in Malaysia, paid another 5,000 ringgit so Ms Kala could travel, along with her 10-year-old daughter and sister-in-law.

But the broker later told her the money was only for two people and said her daughter and sister-in-law had been taken to Malaysia while she was detained in the jungle camp for ransom.

She does not know the fate of her daughter and sister-in-law. While she was in the camp, she learned that each broker, who also acts as a guard, has his own group of migrants to oversee. Each groups is taken to a different camp.

Ms Kala said eight brokers are involved with the jungle camps. "Good looking" women are favoured by brokers, Ms Kala said, adding they will get better food and some even receive cosmetics.

"Some become the wives of brokers because it means they receive better treatment. It could mean they get the chance to go Malaysia," she said. "Some of them got pregnant. But this doesn't mean that they won't be beaten."

One day, the brokers ordered the detainees to move out, but she was too sick to follow them so was left behind at the abandoned camp.

She decided to walk down the hill and was discovered by villagers there.

A Songkhla security officer said some detainees were forced to walk through the jungle for 30km from Satun to camps in Padang Besar.

There could be more than 10 camps along the border of Songkhla and Satun, said the officer, adding the traffickers moved the victims from camp to camp to avoid detection by officials.

Tutansasa, 28, a Bangaldeshi survivor of the Padang Besar camp, where 26 dead bodies were exhumed, said about 300 people were detained in the camp with inadequate food and water. He was there for nine months.

"Those whose relatives could not pay their ransom were beaten to death," he recalled.

"They did bad things to many women," he said, adding that some of the detainees were as old as 70.

The Bangkok Post talked to two villagers living at the foot of the Khao Kheow mountain range in Padang Besar where at least two abandoned camps were discovered, and asked them whether they were aware about the goings on at the camps.

"Yes. We knew there was something wrong going on there," a villager said.

They saw pickup trucks loaded with people, believed to be Rohingya, being taken into the jungle. Occasionally, they saw migrants walking down the hill looking for help.

"We saw, but we could not speak out. Everyone here wants to maintain their normal lives," said a villager on condition of anonymity.

"Human trafficking requires a large network. Do you really think hundreds of people can sneak over the sea and into the jungle to hide without any officials knowing?"

Hiding hundreds of people in a jungle is not an easy task, he said. Supplies and logistics are needed to get them there.

"Who wants to get into trouble by interfering?" he said.

"Alli" from the Rohingya Club in Thailand urged the government to stop the trafficking of Rohingya migrants by sea.

This is the main route of traffickers, and many influential parties, including state officials collude with it, he added.

"If the government doesn't take action to put an end to the sea smuggling routes, human trafficking in the region will never be stopped," he said.