Labour activist and red-shirt supporter Jittra Cotshadet insists she reported to the military regime after the coup, and she is being wrongfully tried for defying its orders.

She appeared before the military court yesterday on the opening day of her trial for allegedly violating the orders of the National Council for Peace and Order (NCPO) to report to officials after the coup. 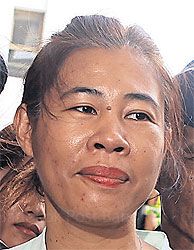 Jittra: Says she reported in

The trial is being held in the presence of diplomats from the embassies of Denmark, the European Union, Finland, France, New Zealand, Norway and Switzerland.

On June 1 last year the NCPO summoned Ms Jittra, 43, together with other activists, to report within two days.

Ms Jittra did not report to the NCPO since she was in Sweden at the time but she reported to the Thai embassy in Stockholm by the required date.

Upon arrival at Suvarnabhumi airport on June 13 last year, Ms Jittra was asked by immigration police to sign a document admitting she defied the NCPO summons but she refused. She was then brought to the Crime Suppression Division to be charged formally, and bailed after that.

The activist appeared before the court yesterday with her lawyers. Pawinee Chumsri, one of her lawyers, said Ms Jittra has a strong defence since she reported to a government entity by the due date.

"Even a military witness has told the court Jittra had no intention of defying the NCPO order and should not be tried," Ms Pawinee said, referring to Burin Thongprapai, an ex-staff member of the military Judge Advocate-General's Department, who yesterday gave a statement to the court as a witness on behalf of the prosecution.

There are seven witnesses on the military side and five on the defendant's side. The court has set the next hearing for July 17.

Jittra, a former labour leader at lingerie producer Triumph, had been advocating for the bail rights of prisoners including those facing lese majeste charges. She left Thailand on April 24, a day after a red-shirt poet Maineung Kor Kuntheera was killed in broad daylight in Bangkok.