Police inspect the scene of a bombing inside the Thongdee grocery store in tambon Sateng Nok of Yala province Friday morning. (Photo by Ayub Pathan)

Four more bombs exploded in Yala’s Muang district this morning, injuring two and bringing the total number of bombing incidents in the province since Thursday night to 28 and casualties to 20.

Pol Gen Chamlong Suvaluck, commander of Yala police, and officers from the EOD unit went to inspect the scene of the first bombing around 7am in tambon Sateng Nok. A ping-pong bomb had been thrown into a shop owned by Pimchai Wongwaiwisawakul, causing damage to the store, but no injuries.

The second location was at a morning tea shop owned by Klin Boonmak in the same tambon. One person was hurt and the shop was slightly damaged.

Mr Klin, 63, told police that two teenagers rode by on a motorcycle and pillion rider threw the bomb. 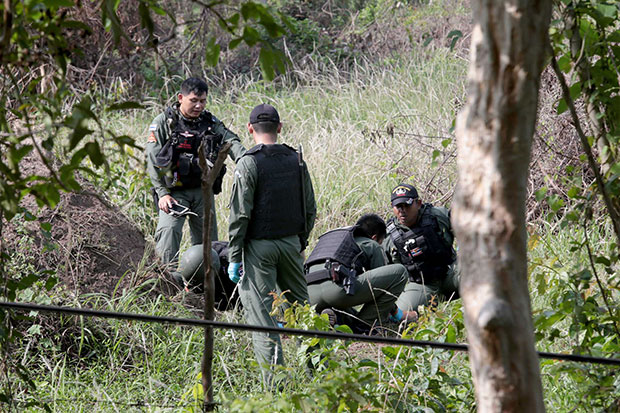 EOD officers inspect the area near a Chinese graveyard in tambon Bunnag Sareng of Muang district where fresh bombs were discovered after an explosion on Thursday night felled three electricity poles. (Photo by Ayub Pathan)

The third incident also occurred in tambon Sateng Nok at the Thongdee grocery store, causing damage to goods there.

Somphong Thongdee, 50, the store's owner, said the bomb exploded inside the shop. Police found parts of a nine-volt battery and mobile phone. The owner suspected that two youths who came to buy soft drinks about 5pm Thursday hid the explosive inside his store.

The last bomb was reported at 7.33am. It exploded at a junction near the Sateng Nok healthcare centre, injuring one person. 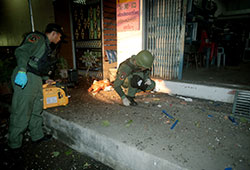 Police also were informed about suspicious objects in other locations that are now under investigation.

At 9am Friday, the EOD officers went to inspect the area near a Chinese graveyard in tambon Bunnag Sareng of Muang district where a bomb explosion on Thursday night felled three electricity poles.

The officers found another three pipe bombs hung on an electricity pole, each weighing about nine kilogrammes. The bombs were set for detonation by mobile phone. They were collected and safely destroyed.

From around 7pm Thursday to 9am Friday, authorities reported bombs -- both exploded and found intact - in 28 locations.

Authorities estimated that 20 separatist insurgents were responsible for the spree of bombings.

Col Pramote said insurgents had tried to create chaos, damage property and endanger the lives of innocent people so they should be condemned widely. 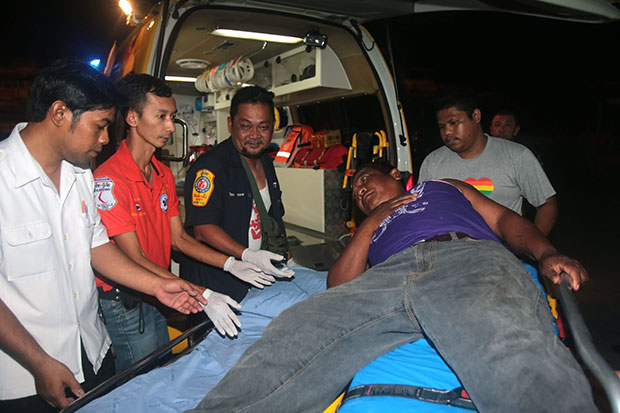 Rescue workers carry an injured man on a stretcher before taking him to a hospital, after a bomb attack in Muang district of Yala province Thursday night. (EPA photo)

His office has been instructed to increase surveillance and urged the public to report any suspicions to authorities to aid security measures.

The National Human Rights Commission this morning issued a statement condemning the attacks on innocent people. It urged the attackers to stop the violence and pursue peace.

The commission asked authorities to quickly find those behind the attacks and provide stricter security, particularly for women and children, in order to restore confidence among residents.