Immediately after police sources revealed they had evidence that an army major general was involved in human trafficking, flat denials came from the military command and from Prime Minister Prayut Chan-o-cha. (Photo by Thiti Wannamontha)

However, the army says none of its officers are directly linked to the illegal activities.

The trafficking of Rohingya and illegal migrant workers, from Ranong down to the southern border, has long been a very lucrative business because handsome bribes were paid to people in uniform, the source said.

"From Ranong down to Padang Besar [in the Sadao border district of Songkhla province], there are normally many police and military checkpoints, but the traffickers can always get the migrants through these checkpoints. Do you ever wonder why?" said the source.

"In this case, although police found evidence to prove the major general's involvement in trafficking, no one dares do anything with this suspect. Of course, you know who is in power. So, who wouldn't be afraid?" the source said.

Gen Udomdej Sitabutr, deputy defence minister and army chief, said the army was ready to investigate even though it could not confirm who the suspect was. 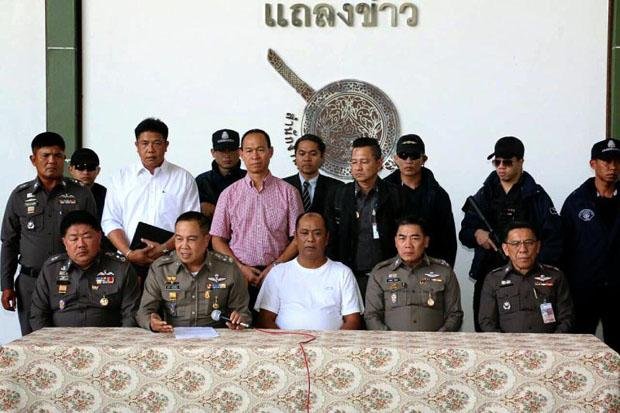 The army last month transferred several military officials away from trafficking areas, though their suspected involvement in trafficking had yet to be proven, he said.

An informed source, meanwhile, said the major general in question had already been promoted to lieutenant general in last month's reshuffle.

Army spokesman Winthai Suvaree said if police have evidence to prove the suspect's involvement in human trafficking, they can ask to detain and transfer the suspect for questioning.

Prime Minister Prayut Chan-o-cha responded sharply to questions about the suspect, saying he had not received any report on this particular case yet, so the press had better give him the name of the suspect.

"Who is he? What is his name? Tell me. They [the army] have not reported to me. The army chief has already told those who were implicated in [the trafficking] that they would be investigated," he said.

Asked about his reported recent telephone conversations with UN secretary-general Ban Ki-moon, Gen Prayut said Mr Ban told him he wanted Thailand to bring the Rohingya matter before other Asean members to discuss how the grouping can contribute to solutions.

The premier also told Mr Ban that he agreed with him on every proposal made, but he wanted the UN to understand that Thailand has its own laws to follow, too, in dealing with Rohingya trafficking.

In another development, Pajjuban Angchotiphan, known as Ko Tong, an ex-president of Satun's provincial administration organisation who is a key suspect in Rohingya trafficking in the South, turned himself in to police and denied the accusations against him.

Of the 65 suspects wanted by police in connection with Rohingya smuggling, 30 have been detained.­­