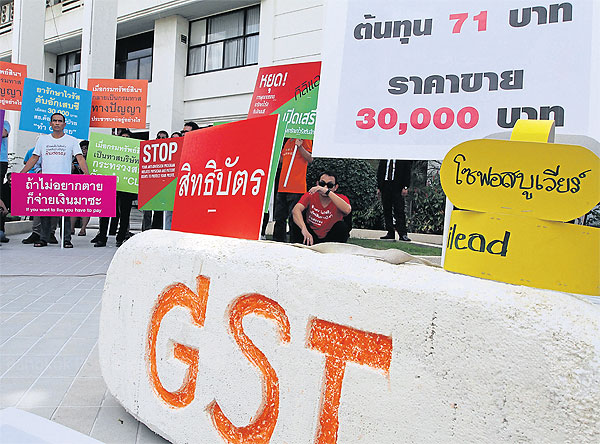 Protesting HIV/Aids patients and civic groups call on the Public Health Ministry and the Commerce Ministry to solve the problem of an overpriced drug that is used to treat hepatitis C. One of the placards reads: “Cost: 71 baht, Price tag: 30,000 baht”. APICHART JINAKUL

Led by Nimit Tien-Udom, director of the Aids Access Foundation, the group stepped in after hearing that Gilead, the manufacturer of sofosbuvir, a drug for treating hepatitis C, recently requested patent rights to supply the drug in Thailand from the Ministry of Commerce's Department of Intellectual Property.

Other groups joining the move were the Thai Network of People Living with HIV/Aids, the Ozone Foundation, the Foundation of Aids Rights, the Thai Rural Pharmacist Society and Thai AIDS Treatment Action Group who lodged a complaint to Public Health Minister Rajata Rajatanavin and Commerce Minister Gen Chatchai Sarikalya, demanding a solution.

Mr Nimit said the drug giant made six requests, but details of the requests were unknown.

The sofosbuvir price was now 30,000 baht a pill, he said, adding treatment will cost a patient about 2.5 million baht over a three-month period.

Sofosbuvir — which offers better results — isn't available in the Thai healthcare system. If the company is granted a patent for the drug in Thailand, patients could be offered the drug, though at a price.

"If a patent is granted, more than 1.2 million patients in the country could find access to sofosbuvir limited," said Mr Nimit, adding the company could end up monopolising the drug for 20 years.

The groups claimed the sofosbuvir price increased after the patent request was submitted.

If the Commerce Ministry fails to cancel the request, the group will have to demand the Public Health Ministry introduce compulsory licences (CL) for the drug, said Surachet Satitniramai, acting health permanent secretary.

CL is a permit to allow someone else to produce a patented product or process without having the consent of the patent owner.