A helicopter takes off from HTMS Angthong during a drill to to provide humanitarian assistance to Rohingya and Bangladeshi migrants stranded on boats in the Andaman Sea. (Photo by Patipat Janthong)

The international meeting in Bangkok on the boat people crisis in the Andaman Sea and Bay of Bengal agreed on Friday to resolve the problems at their “root causes” by helping to improve the living conditions of Muslim Rohingya in Myanmar.

Myanmar agreed with the meeting’s outcome although its representative reacted tersely to those who suggested granting citizenship to Rohingya people and who blamed the country for being the cause of the crisis, saying “finger pointing” would not help.

The Thai hosts described the day-long talks as “very constructive”, saying all 17 countries at the meeting agreed on a statement to provide humanitarian help to 2,500 migrants believed to still be adrift at sea, as well as to the thousands who have already made it to Thai, Malaysian and Indonesian shores.

Others were less impressed with Friday’s talks.

Charles Santiago, chair of the Asean Parliamentarians for Human Rights and a Malaysian lawmaker, described the meeting as “lots of talk with little genuine substance or resolve to take any action whatsoever”.

His group slammed the meeting for failing to “publicly discuss the persecution of the Rohingya”.

The meeting’s closing statement did not mention the Rohingya — who Myanmar refuses to recognise as an official minority.

News reports from last week suggested that Myanmar would boycott the event if the term Rohingya was used.

“The Rohingya are not even named in the statement ... how can you talk about a people if you don’t name them?”

The meeting came up with proposals covering three areas: immediate help for those people stranded at sea, comprehensive prevention of migration and human trafficking activities, and addressing the problems at their root causes.

To address the problems at their root, “capacity building of local communities, providing economic incentives that create more jobs, promoting trade and investment and development assistance to the at-risk areas” will be provided.

In addition, the international community agreed to provide skills training, infrastructure development, enhance the senses of security and belonging; and promote full respect for human rights and adequate access to basic rights and services such as housing, education and healthcare, with the involvement of the private sector and relevant stakeholders.

In terms of immediate responses, intensifying search and rescue operations to ensure the safety of the irregular migrants at sea will be undertaken.

The international community will mobilise resources to support emergency responses.

The meeting also emphasised the need for the countries involved and the international community to resolve the problems “in the spirit of cooperation, international burden sharing and shared responsibility”.

The conference initiated by Thailand followed growing waves of boat people from Myanmar’s Rakhine state and southern Bangladesh who were abandoned by brokers after Thailand belatedly launched a crackdown on human trafficking networks over the last month. Malaysia and Indonesia said about 7,000 migrants remain at sea.

Anne Richard, US Assistant Secretary of State for Population, Refugees, and Migration who represented the US as an observer at the meeting, said the meeting was successful, with serious and fruitful discussions.

She echoed Mr Norachit’s comments, who said the meeting was not a pledging platform for countries to say how many migrants they would receive.

She said the US already received 20,000 refugees last year, and received most of the Rohingya who were living in Thailand and Malaysia.

“We don’t consider resettlement as the first step in a solution to the current crisis.”

“We look at ways to save lives, make changes at the sources so they don’t leave and turn to criminal gangs. We’re also seeking ways to address long-term durable solutions,” she said.

The US yesterday agreed to contribute US$3 million (101 million baht) to the International Organisation for Migration (IOM) out of the IOM’s appeal for $26 million while Australia pledged an additional A$5 million (129 million baht) in humanitarian assistance to Rakhine state and Bangladesh’s Cox’s Bazaar district.

The Indonesian delegation, however, expressed disappointment that very few concrete pledges were heard for immediate resettlement.

“Repatriations to Bangladesh could be expedited [more] easily but resettlements are a bigger issue for us as we don’t want the lengthy process,” said Dicky Komar, director of the Foreign Ministry’s directorate of human rights and humanitarian affairs.

“We want to see how the international community will help shoulder the responsibility, help the resettlements proceed faster and increase the resettlement quotas,” he said, adding that Indonesia has sheltered 1,800 boat people, of which 40% said they wanted to return to Bangladesh.

During the discussion on the issue, the atmosphere became heated after the UNHCR representative touched on the Rohingya citizenship issue.

He said recognising that Myanmar is the origin of the boat migrants is urgently required.

Removal of restrictions on basic freedom is needed to normalise and stabilise lives, he added.

“There is no solution without tracking down the root causes,” said Mr Volker.

His remark drew an emotional response from a Myanmar representative for the foreign ministry, Hitn Lynn, who said “finger pointing will not help solve the issues”.

Hitn Lynn said some aspects of the issue are within its domestic jurisdiction.

Myanmar also said the UNHCR needs to be more informed.

“Understanding the issue is very important, otherwise you cannot find the right resolution,” he said.

“They are not refugees,” said Hitn Lynn.

Deputy Prime Minister and Foreign Minister Tanasak Patimapragorn told the participants in his opening address that the influx of migrants in the region has now reached an “alarming level”.

He mentioned Thailand’s commitment to its tradition of hosting refugees and displaced persons since the 1970s, with some 130,000 people remaining under its care.

He also said the Thai government had ordered the launch of an integrated special task force and humanitarian mission to provide assistance to migrants stranded at sea.

William Lacy Swing, director-general of the International Organisation for Migration (IOM), emphasised finding a balance between “national security” and “human security” as a part of solving the migration problem.

Furthermore, in order to pave the way for long-term solutions, countries and international organisations concerned should focus more on suppressing traffickers.

“How can we arrest human smugglers, including the big fish?” he said. 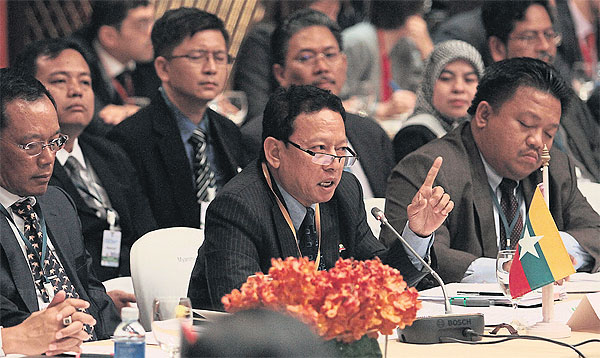 Htin Lynn, the head of the Myanmar delegation, addresses the summit on irregular migration in Bangkok yesterday. (Photo by Chanat Katanyu)