Police have arrested two more suspects accused of involvement in a Ponzi scheme operated by Ufun Store Co after more than 160 million baht was found to have circulated through one of their bank accounts.

Ms Tharathip and Mr Nutthaphong were the 33rd and 34th suspects linked to the pyramid scheme to be arrested, police said. 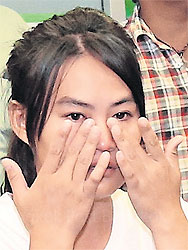 A preliminary examination found more than 1,500 transactions with a value of more than 160 million baht had been conducted through a bank account belonging to Ms Tharathip and her stepmother, police said.

The bank account was opened last year and closed in April, when police opened a probe into the Ufun scam, police said.

There was also evidence that Ms Tharathip had withdrawn five million baht from the bank account, according to police.

Ms Tharathip denied the charges and said she was not a Ufun member and had never known other Ufun members. She also said she did not know of the existence of millions of baht in her account, police said.

Pol Lt Gen Suwira said police are working with staff at Kasikornbank, Tesco Lotus branch in Aranyaprathet district to track all transactions being made through accounts belonging to Ms Tharathip.

Meanwhile, Mr Nutthaphong was apprehended in Chanthaburi province and charged with fraudulent loans and enticing people to invest in illegal fund-raising by promising high returns on an investment, police said.

He allegedly confessed to police he had posted the messages last year but no one was interested in investing, police said.

Mr Nutthaphong said he was invited by a man identified as "Bird" who was a major shareholder in Ufun from Chanthaburi province to invest with the company.