Traffic chaos on Phahon Yothin Road is expected to worsen when construction of the Green Line rail extension from Mor Chit to Pathum Thani starts this month. 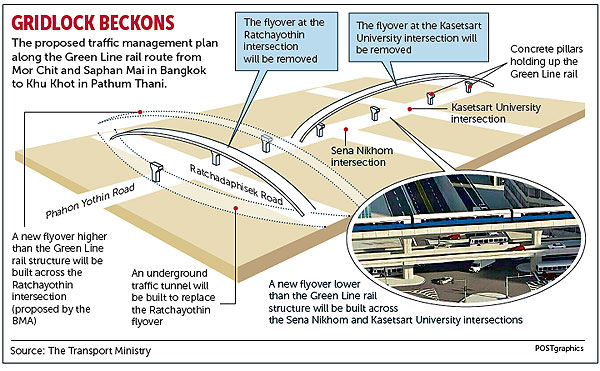 Traffic conditions are expected to deteriorate particularly from the Ratchayothin intersection and the Kasetsart University intersection when the flyovers at the two intersections will be removed to pave the way for construction of the 19km of elevated rail track.

The flyovers, however, will not be demolished until September and November respectively.

The rail route is expected to ease traffic congestion in northern Bangkok when construction is completed within the next five years.

Gen Yodyuth Boonyatikarn, board chairman of the Mass Rapid Transit Authority of Thailand (MRTA), which oversees the capital's subway system, said the MRTA is working closely with the Bangkok Metropolitan Administration (BMA) and traffic police to come up with traffic management plans to ease the impact on motorists during the construction.

MRTA governor Peerayuth Singpattanakul said he is discussing relief measures to handle the expected traffic crisis with the BMA, which owns the flyovers.

Mr Peerayuth said the MRTA has proposed an underground traffic tunnel to replace the flyover which will be removed from the Ratchayothin section.

The BMA, however, has suggested a new flyover be built over the elevated rail route there.

To replace the flyover at the Kasetsart University intersection, the MRTA has proposed a new flyover be built under the elevated rail structure, Mr Peerayuth said.

The BMA has agreed and also suggested that the proposed flyover at Kasetsart be designed to have an exit at Sena Nikhom intersection on Phahon Yothin Road to ease traffic there, Mr Peerayuth said.

The proposed underground tunnel or new flyovers to ease traffic congestion are expected to be built simultaneously with construction of the elevated rail route.

However, no conclusion has been reached yet on the relief measures, although details are expected to be finalised in the next two months, he said.

Mr Peerayuth said the public will not be affected by the rail route construction project until August, because the two-month period will involve a route survey for the relocation of public utilities.

Foundation pile-driving is expected to start later this year, he added.

There will be a total of 16 stations along the 19-km route. Gen Yodyuth said the removal of the two flyovers would lead to even heavier traffic congestion in the area toward year end.

But when construction of the rail route is finished, the Green Line's Mor Chit-Khu Khot section is expected to serve 170,000 commuters a day and ease traffic problems between Bangkok and Pathum Thani, Gen Yodyuth said.

Its construction follows the MRTA on April 3 awarding private companies four separate construction contracts worth a total of 28.7 billion baht, he said.

The project is expected to be finished and open for service by 2020.

Transport Minister Prajin Juntong yesterday said he will next week discuss the planned construction of the 13km-Bearing-Samut Prakan extended section of the Green Line route with Gen Yodyuth.

ACM Prajin said he will ask the MRTA to decide this month whether to operate the section itself or allow the BMA to take over management of the section.

The BMA has negotiated with the MRTA to take over the two extended sections of the skytrain connecting Soi Bearing-Samut Prakan in the southwest of Bangkok and Mor Chit-Khu Khot to the north of the capital.

But the Transport Ministry disagreed and proposed that the BMA operate only the Soi Bearing-Samut Prakan section.

ACM Prajin yesterday also hinted at the possibility of allowing the Bangkok Mass Transit System Plc (BTS) to run the Soi Bearing-Samut Prakan section if the BMA rejects the offer.

Currently, the existing elevated rail routes are run by BTS under its contract with City Hall. The routes end at Soi Bearing and Mor Chit stations.

The Green Line's  Bearing-Samut Prakan section worth about 28 billion baht is expected to be completed in 2020.

Gen Yodyuth also revealed that the MRTA board resolved on Wednesday that a net cost public-private partnership (PPP) model will be adopted for the 34.5km Pink Line (Khae Rai-Min Buri) and the 30.4km-Yellow Line (Lat Phrao-Samrong), which will be built as monorails.

Under the model, the private concessionaires will shoulder 100% of the investment burden.