Thai team members celebrate their victory on the field at Lansdowne Stadium, Ottawa. The ecstatic Thais made the Africans cry. (AFP photo)

Striker Orathai Srimanee scored two first half goals to lead the debutants to a pulsating 3-2 comeback win over fellow minnows Ivory Coast in their Group B match.

The Africans are the lowest-ranked side of the 24 in the tournament. Many of their players collapsed distraught on the pitch at the end of the game, after they hit the woodwork three times during the match.

Ivory Coast striker Ange Nguessan put her side ahead in the fourth minute after a mix-up in the box before Orathai scored with a low shot in the 26th minute and an injury time header that went in off the bar.

Substitute Thanatta Chawong took advantage of some comical errors to head home in the 75th minute before Ivory Coast's Josee Nahi scored with a fine shot in the 88th minute after running 40 metres through the tiring Thai defence.

Both sides were looking for better performances after suffering heavy defeats in the opening round. Ivory Coast were thrashed 10-0 by Germany while Thailand lost 4-0 to Norway.

Earlier in the day Germany and Norway drew 1-1 to virtually guarantee they will move into the second round. Thailand are third on three points while Ivory Coast have none. (Additional details, match summary below) 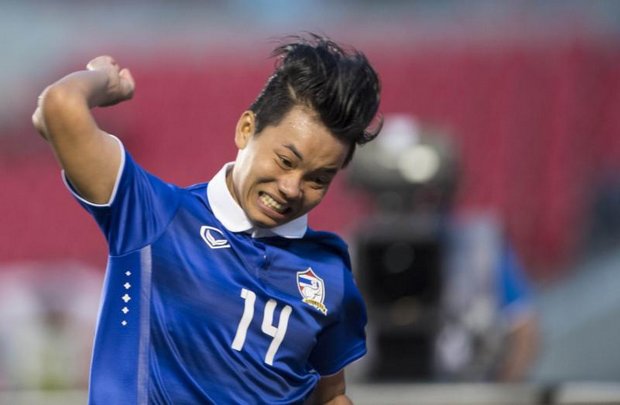 Thanatta Chawong celebrates after coming on as a substitute and scoring the winning goal for the Thais, in just their second World Cup final match. (AFP photo)

Thailand can continue to hope of reaching the knockout round.

They have three points from two games, and are behind Germany and Norway who have four after playing out a 1-1 draw earlier.

"After the loss against Germany we gave everything tonight to come back in this competition," she said.

"Sadly it wasn't enough. It's a sad night for us and for the people of Ivory Coast.

"We came here to win the World Cup and hope to be able to use what we learned from the experience."

Nguessan had opened with the Ivory Coast's first ever World Cup goal just minutes into the game with an acrobatic finish which lifted the team and their spirits.

But Thailand slowly began to find their feet, with Anootsara Maijarern playing into the path of the on-rushing Orathai who volleyed past Dominique Thiamale for Thailand's first-ever goal in the tournament.

A minute into first-half stoppage time, Ines Nrehy missed a chance to give Ivory Coast - ironically nicknamed 'Les Elephantes' - the lead but her effort hit the post.

And the Africans fell behind on the stroke of half-time, when an Orathai header rattled the underside of the crossbar, but goal-line technology confirmed it was a goal.

Substitute Thanatta sealed the three points following a defensive error from the Africans despite Nahi pulling one back.

Les Elephants hit the bar for a third time in the final minutes and Nguessan nearly equalised but Thailand held firm.

The Asian side can continue to hope of reaching the knockout round.

They have three points from two games, and are behind Germany and Norway who have four after playing out a 1-1 draw earlier.