What do Prime Minister Prayut Chan-o-cha and Yingluck Shinawatra, the elected prime minister he toppled in the 2014 military coup, have in common? They share the distinction of having an orchid named after them at the Singapore Botanic Gardens. 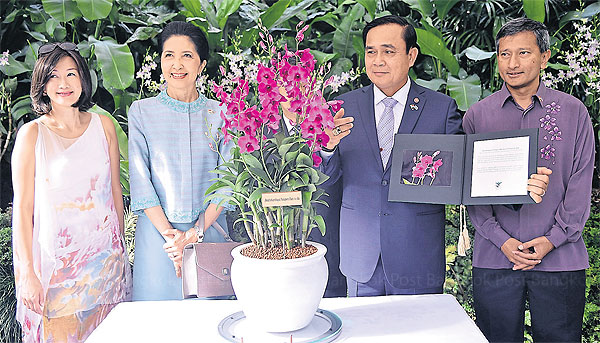 Prime Minister Prayut Chan-o-cha and his wife, Naraporn, stand beside an orchid named after the couple on the last day of their two-day visit to Singapore yesterday. The orchid is named ‘Dendrobium Prayut Naraporn Chan-o-cha’ in their honour. (Government House photo)

Gen Prayut’s two-day official visit to the city state ended Friday on a sweet, flowery note, as the Thai junta chief and his wife Naraporn were presented yesterday with the "Dendrobium Prayut Naraporn Chan-o-cha" orchid hybrid.

The flower — with a traditional purple hue — sits in a varied VIP corner of the 156-year-old Singapore Botanic Gardens, surrounded by the likes of Princess Diana, Nelson Mandela and other Nobel Prize laureates.

However, the orchid naming tradition of the island state, whose national flower is the Vanda Miss Joaquim, has persisted since 1956 with some controversy. Ceremonies held for renowned singer Elton John and Myanmar President Thein Sein have made bold headlines in past years.

Singapore's gift to the British artist and gay rights activist raised eyebrows globally, as it contrasted with the country's criminalisation of homosexuality. Activists have also decried the birth of the "Dendrobium Thein Sein" orchid due to the poor human rights record of the man's tenure.

It is unknown however, if Gen Prayut, while visiting the gardens, came face to face with the "Ascocenda Yingluck Shinawatra" orchid, christened after the very leader he deposed last year.

Ms Yingluck's name was given to the hybrid species during the ex-premier's introductory visit to Singapore in 2011.

Not that Gen Prayut would mind. The premier's suggestion that Thais grow limes at home shows he is well-versed in agronomy. He should therefore be just as keen on these orchids, which were presented to him in a pot on Friday.