City folk can expect to see Bangkok governor Sukhumbhand Paribatra in flooded areas more often, now that he has opted for hands-on tactics to tackle inundation. 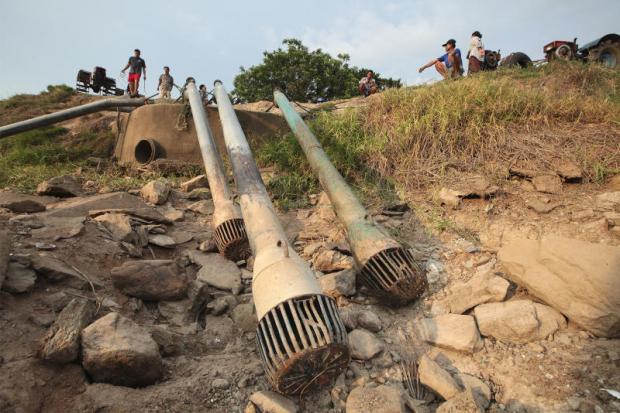 Water pumps are left unused in tambon Nong Phak Nak in Suphan Buri's Sam Chuk district as farmers wait for the irrigation office to release water into a canal. The office is regulating the water flow to cope with drought. Patipat Janthong

The strategy is the governor's response to his critics who were frustrated by floods after heavy downpours on June 8.

MR Sukhumbhand, who was attending a meeting in the Netherlands, cut short his programme and returned to Bangkok to oversee flood management on June 10. He was seen visiting water drainage facilities and flood-prone areas around the city every day.

Many, however, regarded his efforts as PR stunts to rebuild public confidence and boost his image.

MR Sukhumbhand's spokesman Wasan Meewong dismissed criticism that the governor was trying to rebuild his image.

A source at City Hall insisted it was the governor's style to work behind the scenes and not publicise his performance in the media.

"With him making field trips, morning until night every day, things should be better. Both Bangkok residents and city staff should have more confidence and appreciate how much he cares about the [flooding] problem," the source said.

Despite his spokesman's remarks, the tactic is seen as necessary given city residents' simmering anger following his notorious remarks following a previous inundation in March: "Bangkok is a city of water, so if anyone wants to avoid floods, he or she had better move to live on the hills".

His explanation later that the remarks were aimed at clarifying the city's geographical features simply did not work.

The June 8 floods made it worse for the governor, especially as it seemed to once again catch the city unprepared. Officials said people dumping rubbish clogged drains, hampering the city's response.

During a press conference on June 10, the governor said: "It took me only one minute to decide to return and the reason was I am concerned about city residents."

MR Sukhumbhand has tried to avoid making any sarcastic comments in his interviews. Yet he ended one interview with another: "It tends to rain when I am not around."

"But it is still better than the governor sitting in his office and doing nothing," he said, adding the governor needed to show Bangkok voters that he is trying to implement flood management policies.