Ministry tracks 66 at risk of Mers

The Ministry of Public Health is tracking 66 people who are at "high risk" of having contracted the deadly Middle East Respiratory Syndrome (Mers) infection after coming into contact with a 75-year-old man from Oman confirmed as the first Mers case in Thailand. 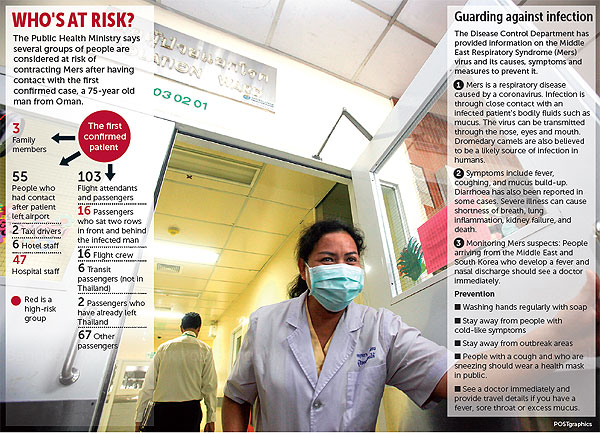 The 66 people are among more than a hundred considered as having different degrees of infection risk due to exposure to the infected man, and the ministry is now attempting to contact them.

There were no new Mers infections reported yesterday despite widespread public speculation that a second case had emerged.

Public Health Minister Rajata Rajatanavin said there are three groups of "high-risk" people. The first group comprises the three relatives of the patient, consisting of his son, younger brother and nephew. The second group are the 16 passengers who sat in the same row or two rows in front or behind the infected man on the flight. The last group are 47 hospital staff who treated the patient after he was admitted.

Among the group of 16 passengers, there is one Thai national who is from Buri Ram province. Health officials so far have been unable to contact him, Dr Rajata said.

Meanwhile, at least 75 people who came into contact with the patient have been adjudged to be at low risk of infection due to the short length of time they spent together with the Omani man. They include two taxi drivers and 12 flight crew members, he said.

For those at low risk, officials will monitor their health for two weeks by phoning them up to ask if any symptoms have developed.

Meanwhile, the Department of Disease Control (DDC) said yesterday it has not confirmed yet whether all three relatives of the Omani man are free of Mers.

Opas Karnkawinpong, the DDC deputy director-general, said viral tests on two of the relatives were negative, but the results for the third are still unconfirmed. Another test is needed in the next one or two days, he said.

The infected patient is currently in a stable condition at a separate unit of the Bamrasnaradura Infectious Diseases Institute, said Mr Opas, adding that the man's three family members are being monitored in a separate patient unit.

His son has started coughing and the younger brother has a fever, Dr Rajata said.

“But even if they prove to be infected, don’t panic," said the minister. "We have separated them from other patients."

Bumrungrad Hospital has placed 58 of its staff in isolation for a period of 14 days — 11 more than previously mentioned by the Ministry of Public Health after the infected patient's admission to Bumrungrad on Monday night.

The hospital employees, including doctors, nurses and other staff members who came into contact with the patient, are now under observation, said Bumrungrad vice-president Channit Thanphiphat.

None of them have shown any signs that they have contracted the disease during the past few days, said Dr Channit, adding that all are undergoing daily tests.

The 58 staff each had varying levels of contact with the Mers patient but all are being closely monitored, said Dr Channit.

The staff have been in isolation since Wednesday, he added.

The hospital has rolled out its toughest safety measures to prevent Mers from spreading to other patients, said Dr Korpong. Bumrungrad Hospital has never before accepted any patients from overseas who posed a risk, he said, adding that the hospital has been on alert for the Mers virus since 2012.

Walk-in patients will be submitted to a triaging procedure, he said.

Dr Mondej Sookpranee, of the hospital's Infectious Diseases Department, said a team of doctors is on hand to question patients and observe their symptoms from the moment they step into the hospital.

"Their role is to find out whether these patients fit the criteria which would place them in risk groups," Dr Mondej explained.

If this is the case, they will be further examined in an isolation room that has a separate air filtration system from the remaining hospital buildings.

"The medical team overseeing those risk groups won't be looking after other patients either," he said.

Regarding the 75-year-old man from Oman, Dr Korpong said he walked into the hospital on Monday evening. The emergency room was empty at that time and the man and his family were quickly isolated after going through triaging.

He showed signs of fatigue and shortness of breath. An X-ray was performed but doctors could not diagnose whether the man had pneumonia or had suffered a heart attack, or both.

He only developed a fever over the next few days, Dr Korpong said.

Dr Channit said the Public Health Ministry was immediately alerted last Monday about doctors' suspicions that the man had contracted Mers. The patient underwent four tests between Tuesday and Thursday, with the first positive result delivered on Wednesday.

Prime Minister Prayut Chan-o-cha yesterday assured the public that authorities have taken precautions to prevent the spread of Mers and are well prepared to contain the virus.

Thailand has been praised abroad for playing a leading role in preventing the spread of communicable and infectious diseases such as bird flu, Sars and Ebola, said Gen Prayut. All 69 hospitals which dealt with those deadly viruses are now on full alert for a Mers outbreak, he said.

Meanwhile, Mers in South Korea, which has killed 24 people, appears to be subsiding with only one new case reported in recent days — the lowest rate of new infections in two weeks. 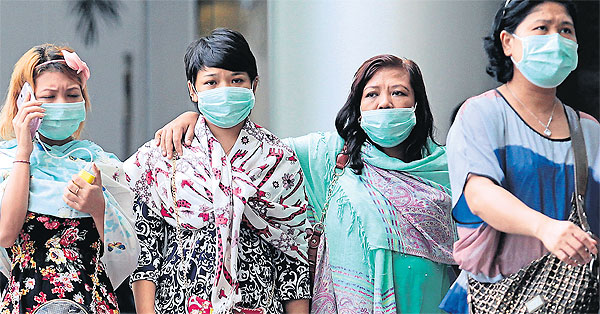 People at Bumrungrad Hospital wear masks as a precaution after a Middle Eastern man admitted to the hospital earlier this week was confirmed as having Mers. The hospital has quarantined 58 of its staff for two weeks. Patipat Janthong