Health officials were out in force at Suvarnabhumi airport during the weekend, trying to check the temperature of every arrival, one of several measures during a red alert to detect and contain any further Mers infections. (Photo by Thanarak Khunton)

The Public Health Ministry and airport authorities have stepped up preventative measures to stop the spread of Middle East Respiratory Syndrome (Mers) when more than 10,000 Thai Muslim pilgrims travel to Saudi Arabia for the hajj in September.

The country's first confirmed case of Mers, a 75-year-old man from Oman, raised concerns over the possible infection of people going to and from Saudi Arabia.

According to the Department of Religious Affairs, 10,400 people from Thailand are likely to attend the Muslim pilgrimage, which will take place in late September. Visitors will begin leaving for Riyadh in August, and return as late as October.

Surachet Satitramai, the Public Health Ministry's acting permanent secretary, said Muslims will not be stopped from attending the hajj.

However, when people return they will be monitored for 14 days to a month to make sure they are safe from infection, Dr Surachet said.

If anyone develops a fever or flu-like symptoms, they will be placed in isolation and observed at a hospital.

The Public Health Ministry will ask tour companies to submit the names of those who are travelling to Saudi Arabia and they will be required to attend a class about communicable diseases in the Middle East and prevention practices.

As usual, people who make the pilgrimage to Mecca will have to take flu and yellow fever vaccines. Doctors approved by the Public Health Ministry will accompany pilgrims to Medina and Mecca, centres for the annual hajj.

"For three years, we have implemented such measures with the hajj. We will intensify it this year against the Mers epidemic," said Dr Surachet.

Religious Affairs Department officers in the southern border provinces insist that no Muslims have cancelled their planned trip so far.

About 300 Thais will be the first to leave on a charter flight Aug 16, said Wae-yuso Sama-ali, head of the department's public relations team. Others will follow until mid-September. The hajj will begin about Sept 20. 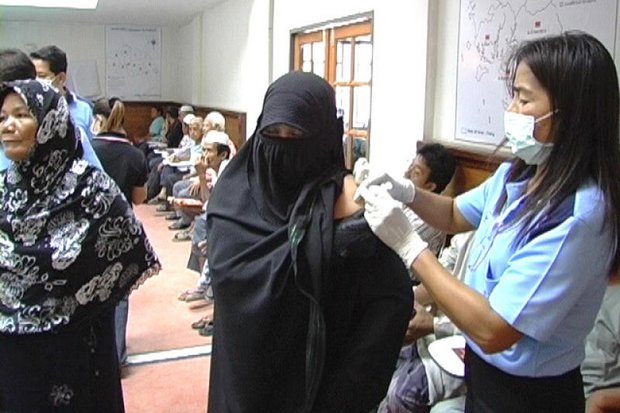 Health checks are a routine part of the pre-hajj preparations for Thai pilgrims, but measures will be augmented in September for this year's pilgrims, because of the threat of Mers, which originated in Saudi Arabia. Thailand is allotted 10,000 visas for Muslims to travel to Mecca for the hajj, a duty for all Muslims at least once in their lives. (File photo by Methee Muangkaew)

He said travellers are confident in Saudi Arabia's measures for screening for infectious diseases.

According to the Foreign Ministry, Saudi Arabia has stepped up its measures to prevent people catching Mers and other communicable diseases.

Thailand has improved its screening measures at three border checkpoints with Malaysia and added another thermal scanner at Suvarnabhumi airport.

Public Health Minister Rajata Rajatanavin, who inspected Suvarnabhumi airport Sunday, said 37 airlines operate flights between Bangkok, the Middle East and South Korea. The ministry has handed out guidelines to airlines and airports on how best to deal with suspicious cases on flights and at airports. 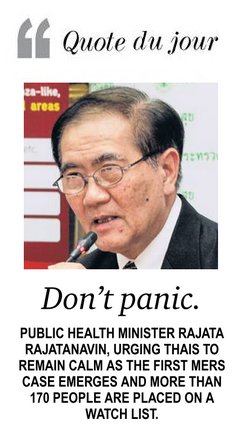 Meanwhile, Health officials are searching for 82 people, deemed to be at a low-risk of infection, who came into contact with the man from Oman infected with Mers.

Deputy permanent secretary for public health, Wachira Pengchan, said that 94 people who came into contact with the man are currently being monitored.

On Thursday, the man was moved from Bumrungrad Hospital to an infectious diseases facility in Nonthaburi.

Three relatives of the man, also being kept in isolation rooms at the institute, had tested negative for the virus, said Dr Surachet.

"The condition of the Mers patient is better overall," he said. "The chest x-rays show improvement and he can eat soft food."

Songpol Chawalpipat, director of Ratchaburi Hospital, dismissed a report on social media that some staff at the hospital had contracted Mers, saying the hospital had isolated a woman after she returned from South Korea but she was later discharged after a lab test showed no signs of virus.

South Korea reported one more fatality from Mers Sunday, raising the death toll to 25. The Ministry of Health and Welfare in South Korea confirmed three new patients have been infected.

The number of people in quarantine has dropped from 5,197 to 4,035, while 43 people who had the virus have now been discharged from hospital, up from 36.