The former Bangkok police chief Kamronwit Thoopkrachang may be charged with smuggling a gun out of Thailand as airport authorities move to tighten luggage screening procedures, transport authorities said on Thursday.

Prasong Poontaneat, chairman of Airports of Thailand Plc (AOT), said if the former metropolitan police chief was found guilty of taking a small gun and five bullets out of the country without seeking prior permission from the airline that served him, he would be liable to a jail term of up to two years and/or a fine of up to 80,000 baht.

However, there was no data to confirm if Pol Lt Gen Kamronwit's gun had been in any of his luggage because the in-line luggage screening system at Suvarnabhumi airport stored x-ray pictures for only three days, Mr Prasong said.

Pol Lt Gen Kamronwit, 60, departed from Suvarnabhumi airport last Thursday together with local administrators of Pathum Thani province for a waste-to-energy inspection trip in Japan. The retired police commissioner is an advisor to the president of a sub-district administration organisation in Pathum Thani. 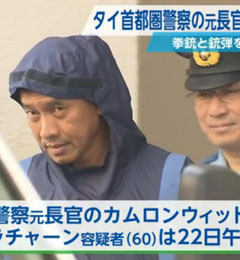 Japanese police arrested him on Monday when he was about to board a flight back to Thailand.

As his case is raising doubts about security checks on outbound travellers at Suvarnabhumi airport, Transport Minister Prajin Juntong said on Thursday that AOT would review its weapons detection system to find out if it was a human or machine error in relation to the case of Pol Lt Gen Kamronwit.

The machines have been in use for a long time and their software might be outdated, while suspicious objects are more developed and take many new forms. Therefore, new software should be ordered, ACM Prajin said.

Phet Chancharoen, deputy director of Suvarnabhumi airport, said Pol Lt Gen Kamronwit had undergone a normal search and luggage x-ray procedure at the airport and he had cooperated with it.

CTX machines mainly detect the materials or the vapour of gunpowder that are components of a bomb that could destroy an aircraft. Also, they are set to detect big guns or weapons with metal density, he said.

The five bullets of the small gun might contain too little gunpowder vapour, so the machines did not sound any alarm, Mr Phet said, referring to the gun and bullets of Pol Lt Gen Kamronwit.

The former Bangkok police chief was arrested at Narita airport for the possession of a .22, five-shot revolver that is 11.75 centimetres long. He said he forgot he had it in his medicine pouch.

Media reported on Thursday that Japanese public prosecutors had sought to detain Pol Lt Gen Kamronwit for ten days as more evidence is collected and they consider an indictment.