A Pattaya discotheque has been ordered to close for 10 days after a Thai woman fellated a South Korean man in full view of other customers early Monday morning.

Pictures of the lewd act were quickly circulated on Facebook and other online social networks, drawing shocked outrage and criticism.

Police, soldiers and local officials inspected 808 First Class Clubbing on Walking Street in South Pattaya, of Bang Lamung district on Monday after hearing of the incident. 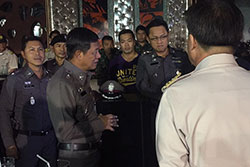 Pictures spreading online showed the woman giving oral sex to an Asian man in full view of other pub goers around 3am.

The Bang Lamung district chief said the night club had responded appropriately, and  a security guard had asked the pair to leave the premises immediately.

However, police said the incident had tarnished the image of Pattaya, and they were tracking down the two people involved, who were likely to face charges of public indecency.

District chief Chakorn said he had also ordered legal action against the discotheque for violating the Entertainment Places Act.

Natthawut Phetsaidee, 26, a security guard at the venue, told police that he was told that two Thai women entered the nightspot shortly before it was about to close and one of them performed oral sex on a South Korean tourist in front of other customers.

He rushed inside and asked them to leave. The two women and the South Korean man left together, Daily News online reported.

He believed the woman might be a sex worker. The crackdown on sex workers along Pattaya beach might have driven them to look for customers at pubs and nightclubs, he said.