No change, other than costlier bribes, for Thailand's 'shadow economy'

Fern’s cocktail bar appears each night on a sidewalk between a group of scantily-clad women from the next-door go-go bar and a noodle stall near one of Bangkok’s infamous red-light districts. By morning it has vanished.

The bar, the prostitution, even the food stall are illegal, part of a shadow economy that one economist estimates is worth more than two-fifths of the nation's gross domestic product. The government says it has cracked down on corruption, and that's the reason why the country has the slowest economic growth among developing nations in East Asia. Yet on the streets of the capital, there's little sign of any difference.

Payments to bribe officials and mafia are higher now, so everyone is earning less, said Fern, who uses an alias because the bar she's been running for almost five years is unlicensed. She said it has become more expensive since the army took over because the people she pays said they also have to pay more.

"Thailand's shadow economy ranks globally among the largest," said Friedrich Schneider, an economist at Johannes Kepler University of Linz in Austria and author of Hiding in the Shadows: The Growth of the Underground Economy. He estimates Thailand's shadow economy was 40.9% of real GDP in 2014, including some illegal sectors such as gambling and small weapons, but largely excluding drugs.

On the streets of Bangkok, there are undocumented and untaxed businesses everywhere, from food stalls to jewellery vendors and pop-up bars like Fern's. Inside the buildings and away from the capital are darker corners of the illicit market: sex workers, gambling dens, drug smuggling and human trafficking.

Fern says she makes three cash payments each night, one for a local official, the second to a fixer who oversees the street stalls in the area, and the third and largest to someone who claims to represent the police. That last bribe has risen about 75% since the anti-graft crackdown began, she says.

The junta has spoken frequently of the need for a corruption cleanse, not only among the nation's politicians, but society at large. While there have been a handful of high-profile arrests of those accused of corruption or human trafficking, officials have focused largely on small-scale public-order issues, such as banning sunbed rentals on public beaches or clearing vendors from some Bangkok sidewalks. 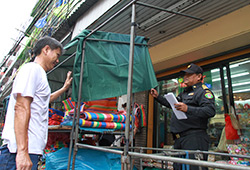 A city inspector marks space new spaces for vendors in Chakpetch, Phahurat and Tripetch roads in May. Thailand has reregulated street vendors in an attempt to crack down on corruption. (Photo by Thanarak Khunton)

"Today the economy is slowing because previously everybody had money to spend," Prime Minister Prayut Chan-o-cha said June 5 in a nationally televised speech. "But now we have a problem, which we all know. It's because some people spend money from illegal businesses and money from fraud. Now the government has come to set things right, causing that money to disappear."

The Thai economy grew 3% in the first quarter as exports and prices declined. Last year, growth was the slowest in four years.

"There is little evidence on the policy front that the military government has made much progress in making state enterprises or the civil service more accountable to the public," said Ambika Ahuja, a London-based analyst at Eurasia Group, a political-risk adviser. "What the army has done, however, is ramp up on anticorruption rhetoric, and part of that is to explain away why the economy has been performing below potential."

The real problems facing the economy are demographics, labour costs, over-reliance on raw material exports and a loss of competitiveness, Ms Ambika said.

Thailand has been losing its export competitiveness in electronics in the past three years, while investment in research and development has lagged behind Singapore, Malaysia and Indonesia, the central bank has said. Nearly a third of Thais will be older than 60 by 2020, compared with fewer than a sixth in the Philippines and a fifth in Malaysia, according to the United Nations.

Blaming corruption is standard practice for Thailand's military takeovers, Ms Ambika said. "Every army government uses it as one of the reasons, if not the main reason, for launching a coup. It justifies a takeover."

Thailand has had at least a dozen coups since 1932.

Government spokesman Sansern Kaewkamnerd said leaders are serious about tackling corruption. He points to a government committee against graft, chaired by Gen Prayut, which oversees anti-corruption policy, and the launch of a project against bid-rigging. He said several subcommittees have been formed, including one to cultivate good morals among children.

Maj Gen Sansern said more than 300 government officials suspected of being involved in corruption cases have been transferred to inactive positions to ensure they will not influence the process of gathering evidence.

"Tackling corruption in the public sector is the government's top priority," he said. "We can't guarantee we will solve this problem 100%, but we will do our best."

So far, the current campaign to stamp out graft is no different than past efforts, said Chuwit Kamolvisit, a former massage-parlour owner turned politician and anti-corruption crusader. Mr Chuwit, a self-described former "super pimp" and "corruption addict" who regularly paid police bribes, said the army has focused on the wrong areas.

"Getting vendors off the streets" isn't going to remove corruption, he said. "Corruption is a cancer. It is inside the body," Mr Chuwit said. "Gen Prayut can't take care of the disease in one year because the problem is inside" the government. A vendor sits on a sidewalk as she waits for buyers of her locally made footwear and other crafts in the central business district of Bangkok June 24. Many Bangkok streets are lined with vendors selling food, clothing, flowers, toys, electronics, and even foot massages, most of them illegally. (AP photo)

No one knows how big the gravy economy is or how much money has vanished from it due to the crackdown, Deputy Prime Minister Pridiyathorn Devakula said. "Hundreds of billions" of baht could have been affected, based on the amount of drugs seized by the police, he said.

"It's the right thing to do, but it affects the economy, making it slow down for possibly a year before it can adjust," MR Pridiyathorn told reporters on June 5. "The crackdown on corruption also has some impact, but the most serious one is drugs, followed by gambling."

There have been a few high-profile arrests, including local officials and an army general, all accused of profiting from human trafficking. Those arrests came after an international outcry following the discovery of mass graves at jungle camps in southern Thailand used by smugglers.

The biggest catch came in November, with the arrest of Central Investigation Bureau chief Pongpat Chayapan and several associates on accusations of citing the monarchy to profit from illegal activities, including gambling and oil smuggling. Police seized some 2 billion baht in assets including antiquities, ivory, jewellery, artworks and cash stashed in vaults. Pol Lt Gen Pongpat was found guilty by the criminal court and sentenced to more than 30 years in prison.

In her street bar, which seats a handful of people around a makeshift counter, Fern serves a group of foreigners whiskey mixers with ice from a cool box. She said she tries to send 10,000-12,000 baht home to her family in the northeast of the country, but there are fewer foreign visitors now.

Thailand gets 10% of its GDP from tourism. Visitor numbers are recovering from a year ago, when the streets were full of protesters calling for the previous government's ouster. Tourist numbers fell 6.7% in 2014.

Mr Chuwit said he regularly paid police in his massage parlour days to turn a blind eye. If there was an anticorruption sweep, he would just lay low for a few weeks until it passed.

"This is just a show," Mr Chuwit said. "It's hard to crack down on corruption in Thailand. I don't think we can handle it in our generation."