Gay couple in hiding with baby

Legal limbo after surrogate mum refused to sign over child

As storm clouds started brewing over Thailand’s surrogacy industry last year, a familiar sense of dread settled over Gordon Lake. It wasn’t the first time the 41-year-old and his husband, Manuel Santos Valero, had found themselves caught up in a crackdown on commercial surrogacy.

In 2013 their son, Alvero, was conceived using a surrogate in India just months before the government moved to shut down the industry.

“The problems in India started shortly after Alvero was already conceived, and everything went down during his gestational process,” said Mr Lake, a US native who has been living in Spain for the past 15 years.

Alvero was eventually born without major incident. But this time, the clouds overhead are far darker.

Since January, Mr Lake and Mr Valero have been virtual prisoners in their Bangkok apartment, afraid to step outside or even to use a phone for fear that their six-month-old daughter, Carmen, will be taken away from them.

“I don’t take her [Carmen] to any meetings with me any more, and every time I have to go to a meeting myself, I take the long way home just to make sure I’m not being followed. We’re really worried,” Mr Lake said.

Like Alvero, Carmen was conceived only months before authorities launched a crackdown on commercial surrogacy. But that proved to be just the beginning of the couple’s troubles.

Mr Lake and Mr Valero are now embroiled in a bitter dispute with the surrogate mother they paid to give birth to Carmen, who is refusing to sign over custody of the child despite having no biological ties to her.

The couple believe the main reason is her discovery that they are gay.

Because Thai law automatically grants custody of a child to the birth mother, they live in fear that a knock on the door could be the surrogate coming to take their daughter away.

They have been moving apartments every three months out of fear they will be tracked down.

“On one occasion, she [the surrogate mother] came to the building where we had been living until a few days prior, and asked for Carmen to be brought down,” Mr Lake said.

“Some neighbours witnessed that she was there with her daughter for eight hours, and when she left there was at least one other person, but maybe others, that came out of hiding to leave with her.” 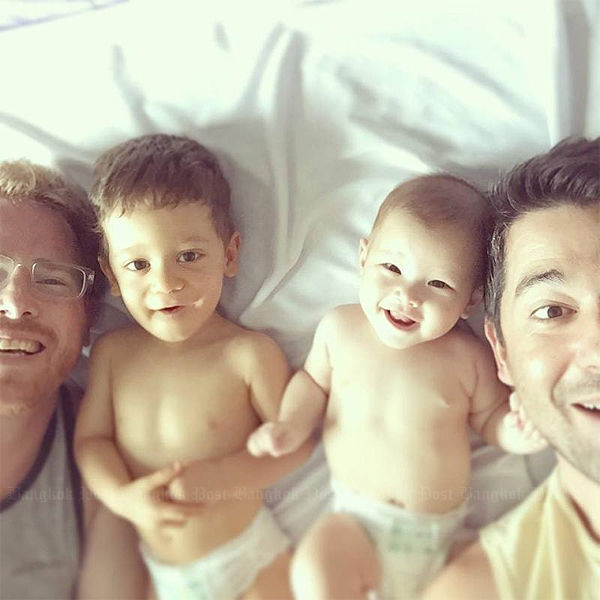 The desperation they are now experiencing is a far cry from the brimming optimism that filled Mr Lake and Mr Alvero as they travelled to Thailand early last year, drawn by reports of the country’s quality surrogacy services, which while not strictly legal were widely tolerated by authorities.

Dealing through a “facilitator”, they engaged New Life IVF as their surrogacy agency, which in turn contracted All IVF Clinic to perform the necessary medical procedures.

But when the case of baby Gammy, who was born with Down’s syndrome to a Thai surrogate and abandoned by his biological parents, made international headlines in August, a familiar feeling of helplessness fell over the couple.

Soon after the scandal broke, both New Life and All IVF were forced to close their doors. The couple, back home in Spain, were left powerless and with few channels of communication.

After Carmen was born on Jan 17, Mr Lake said he went to visit the surrogate daily. Within a few days, the mother signed a release allowing them to take the child home. “I took her flowers, I brought my son up with me,” he said. “But my husband decided not to go up because we didn’t want there to be too much going on in the room. And everything was fine. She came down to see the baby in the nursery through the glass. We exchanged Line accounts and we were sending each other messages using a Thai translator.”

But 10 days after Carmen was born, Mr Lake and Mr Valero received a text message from the surrogate’s translator. “It said something to the extent of ‘I don’t agree, and I want to keep the baby.’ ”

A meeting had already been scheduled for the following day at the US embassy to sign the final documents that would allow Carmen to obtain a US passport. “We went, crossing our fingers that this was all just some horrible nightmare. And she didn’t come,” Mr Lake said.

The reasons for the woman’s sudden change of heart remain unclear, but she has launched a media campaign accusing the couple of running a human trafficking operation.

“This clearly is human trafficking because there is money involved,” the woman’s representative, lawyer Verutai Maneenuchnate, told Bright News in an interview screened on March 5.

But Mr Lake and Mr Valero believe the central reason was the surrogate’s discovery that they are gay.

She also said that she was worried for the health and safety of Carmen, and thought that the baby might have been hers. “But it was a frozen [egg] transfer, so it’s absolutely impossible that it’s hers,” Mr Lake said.

The woman has kept her identity hidden in media interviews and attempts to contact her have either met dead ends or gone unanswered. But she told Bright News that she was adamant about keeping custody of Carmen. “The bond I have with my baby can’t be traded for money and I am not going to sell my daughter,” she said. The woman has already been paid US$9,250 (about 313,000 baht). A final payment of $5,100 is due after she signs the documents to relinquish parental rights. She has offered to return the money.

As the conflict rolls on, Carmen continues to grow alongside Alvaro.

She will, however, never have the opportunity to meet the woman she was named after; Mr Valero’s grandmother died two weeks ago. “She didn’t even get to meet her, so that’s made everything so much harder,” Mr Lake said.

For now, the couple are trying to remain upbeat, though the fatigue is obvious in Mr Lake’s voice. “It’s one foot in front of the other, but we have to think of the endgame, of our family back home together.”