Five people were killed, including an infant, and 50 others injured in a rear-end collision involving two open touring carts at Khon Kaen Zoo on Sunday afternoon. (Photo by Chakapan Natanri)

The fatal accident occurred when about 30 Thai and foreign tourists were travelling in an open seater cart along a 500-metre long downward slope, part of a sightseeing route in “Toong Saen Kwang” where visitors can see deer up close and feed them.

Pol Lt Col Saksit Thanakitpairote of the Tourist Police Division's sub-division 3 said a preliminary investigation found the accelerator pedal of the sightseeing bus became stuck. This prevented the driver from being able to brake or control the vehicle.

It came racing down the slope at high speed and slammed into the back of another tourist bus which was parked on the roadside with some 30 visitors on board. The impact was so severe that the two vehicles carried on for another 300 metres down the slope before hitting a tree and flipping onto their sides. A number of passengers were seen to jump for their lives.

Two people died instantly. Their bodies were found under the buses. Three others died on the way to hospital. The crash left more than 50 people injured. They have been taken to five different hospitals in Khon Kaen.

Khon Kaen deputy police chief Pol Col Supakorn Kamsingnok said the zoo was ordered closed indefinitely to allow police to inspect the crash site and collect evidence. Police are trying to determine if the accident was caused by driver fault or a technical problem. 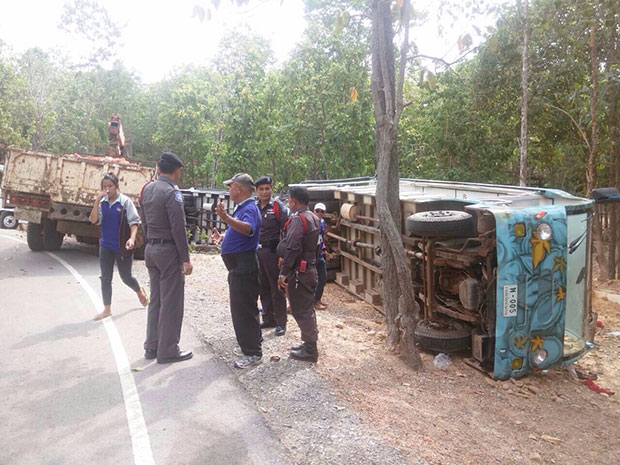