In an exclusive interview, the Fisheries Department chief Joompol Sanguansin says the 3,072 unlicensed trawlers will be back working soon, but in the meantime, Thai waters have been over-fished for 39 years and can use the break. (Photo by Chanat Katanyu)

The Department of Fisheries is one of the key agencies in dealing with Illegal, Unreported and Unregulated (IUU) fishing.

The problems of IUU fishing were so rampant in the industry that the EU issued Thailand with a "yellow card" warning last April.

More than 3,000 trawlers remain docked to avoid tough new measures imposed by the authorities, as the government attempts to avoid a final "red card" verdict which could result in a ban on Thai seafood exports to Europe.

Joompol Sanguansin, the department director-general, talks about what is being done. 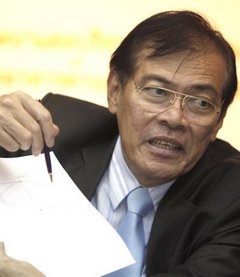 Joompol: The EU should give more time

The Department of Fisheries is responsible for granting licences for fishing equipment to trawlers.

Most illegal trawlers lack a licence for fishing equipment or their equipment does not match what is specified in the licence.

The department stopped granting licences for otter trawl and push nets in 1981 and the other two forms of fishing gear in 2000.

Currently, 3,930 fishing boats with licences are equipped with illegal fishing gear, while 3,072 boats use banned gear but do not possess a licence.

From July 1, when the new rules took effect, the group without a licence can be fined if they are found still fishing.

The trawler operators put pressure on us to grant them licences, despite the fact they still violate the law.

We are still firm on our policy to control the use of destructive fishing gear. Operators of illegal trawlers will have to comply with the law.

Once they change their gear, they will be granted licences and can catch in the sea as usual. 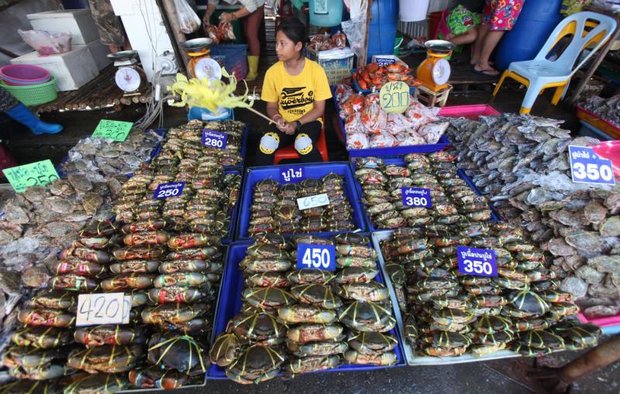 Shoppers interviewed at fish markets and seafood restaurants on Sunday report little if any price rises because of the trawlers' strike. (Photo by Thiti Wannamontha)

Thailand has faced overfishing since 1976 when as many as 12,000 vessels were found with destructive gear. Five years later, the department announced a ban on otter trawl and push nets.

Past governments granted amnesties for violators on five occasions, most recently in 1996.

Later in 2000, the department announced it would stop granting a licence for day anchovy purse seine, and anchovy falling net.

Currently there are 1,431 trawlers equipped with the anchovy catching gear and 558 of them operate without a licence.

We have found 36% of overfishing takes place in the Gulf of Thailand and 4% in the Andaman Sea, most by boats equipped with otter trawl and push nets.

About 300,000 tonnes of catch would disappear from the market if the fishing boats stayed in dock for one year, compared to the 3 million tonnes of total supply which enters the market.

However, in reality, it is impossible for thousands of boats to stay docked for that long, as the fishermen have to earn a living and they could not afford to pay their workers if they do not fish.

We believe most boat operators will finally try to change their fishing gear to comply with the law and apply for licence so they can go to sea again.

The impact will be limited and will not last long.

But in the long term, we expect a positive outcome. In the end we will have only legal trawlers in the sea and this will be in line with the EU's request.

The EU has asked Thailand to implement stronger punishment for wrongdoers. It also suggested we introduce a national action plan to combat IUU fishing, install a vessel monitoring system (VMS) to track trawlers with over 30 gross tonnage, and develop a system of traceability to verify where seafood products come from.

We have made more than 50% progress in complying with the EU's demand and the work will continue until our goals are met.

We hope the EU will give us more time to deal with the problem, as it has granted extensions to other countries facing the same situation. We need a little more time.

Regarding the VMS installation, more than 500 trawlers out of the 6,615 required have installed the system.