Officials inspect a collapsed section of the embankment road next to the Khlong Phraya Banlue canal in Lat Bua Luang district of Ayutthaya on Monday. (Photo by Sunthorn Pongpao)

Riverfront roads nationwide are to be inspected for the risk of subsidence aggravated by the drought after some recently collapsed.

The inspection was ordered by Transport Minister Prajin Juntong. The Highways Department and Rural Roads Department are surveying roads along waterways nationwide. A special budget will be set aside for repairs and reinforcement of the roads prone to subsidence.

Some roads in Ayutthaya and Saraburi were closed in recent days after they developed large cracks, a result of fast-receding water which caused the soil underneath the roads to subside.

In Saraburi, a 200-metre road split was reported on a road along Khlong Rapeepat in Nong Khae district.

"[The road cracks] are one of the severe impacts of drought to hit the nation," ACM Prajin said.

Darun Saengchai, director-general of the Department of Rural Roads, said repairs are under way on the damaged roads. The work could take six to seven days and the roads would be re opened to traffic by next week.

He said specialists had been sent to inspect and repair roads along irrigation canals which show signs of damage in Ayutthaya, Pathum Thani and Saraburi.

Sarawut Songsiwilai, deputy director-general of the Department of Highways' road maintenance division, said inspections are speeding up so repairs can start right away.

The department supervises more than 60,000km of roads nationwide, although only 5% of the roads are prone to drought-aggravated subsidence.

Meanwhile, farmers in Suphan Buri have been forced to buy water for growing rice, according to Watcharin Kerd-im, a village chief in tambon Talingchan of Muang district. Some fields need the equivalent of 50 trucks of water, costing 1,200 baht each.

"Farmers cannot wait any more for the government's help as the paddy is producing grains," Mr Watcharin said.

The government is digging up more than 500 groundwater sources to help farmers in drought-stricken areas, mostly in the rice-belt area of the Central Plains.

Also, riverfront residents in Nakhon Sawan, Uthai Thani and Chai Nat are being told to prepare to evacuate their homes if the level of the Chao Phraya keeps receding, as this could trigger landslides.

As less water is released from the Chao Phraya dam upstream, the water in the river continues to drop, which could cause the river banks to collapse.

Chao Phraya dam director Ekkasit Sakthanaporn said the river fell by another 14cm in Chai Nat's Sapphaya district Monday. The river there is now 13 metres above sea level, which is below its critical point of 14 metres.

In the meantime, water in the Bhumibol dam in Tak has reached its lowest point in its 51 years of operation, according to dam director Nattawut Jaemjang.

"We no longer let out water for farmers as we have to keep what's left in reserve for consumption and maintaining the ecosystem'' he said. ''We have asked farmers to stop farming more crops and help save water."

People living along the Chao Phraya River in three provinces were advised on Monday to prepare for evacuation as waterside subsidence is very possible as the river level continues to fall.

They were advised to closely monitor the riverbank for signs of collapse, find ways to protect their property, and be ready to evacuate and move out their possessions if there is any sign their homes may subside.

He said riverside collapse was possible as the level of the river was dropping quickly.

In the previous 24 hours, the level of the river above the Chao Phraya dam in Bang Luang sub-district of Sapphaya district, Chai Nat, had dropped by 14 centimetres to 13.34 metres above mean sea level, already 66cm below its critical level of 14m, Mr Ekasit said.

Sections of waterside roads in Saraburi and Ayutthaya provinces had already collapsed.

Two sections of an embankment road parallel to the Khlong Phraya Banlue canal in Lat Bua Luang district of Ayutthaya fell 2-3m along a combined distance of 600m on Sunday and Monday.

The canal adjoins the Chao Phraya River in Bang Sai district of Ayutthaya.

On Sunday a 300m section of an embankment road along the Khlong Rapipat canal collapsed nearly 3m in Nong Khae district of Saraburi province. The canal adjoins the Pa Sak River which connects to the Chao Phraya River in Phra Nakhon Si Ayutthaya district of Ayutthaya.

Noppadol Amornvej, assistant chief for disaster prevention and mitigation in Ayutthaya, said on Monday that embankment roads had collapsed in Sena district in May, with additional waterside collapses in Tha Rua, Bang Sa-ai, Bang Pa-in and Wang Noi districts.

Meanwhile, water shortages are becoming more severe in provinces in the North, the Central Plain and the Northeast.

The same was happening to nearly 13,000 rai of crops in Pong district of Phayao, where the Yom River was drying up.

The water shortage was the most severe in 50 years and affected 200,000 rai of paddy fields in Nakhon Phanom province. Authorities planned to pump water from the Mekong River to save farmland in the province.

Thung Phueng sub-district of Chae Hom district of Lampang province had been without rain for the longest period.

In Sakon Nakhon province, the longest stream, Huai Pla Hang, had dried out for the first time in 20 years,  affecting both farming and tap water production in Dua Sri Khanchai sub-district of Wanon Niwat district.

In Buri Ram province, the Khlong Manao reservoir in Non Dindaeng district to the south was the shallowest in 40 years. Authorities were cutting back the discharge from the reservoir to ensure there would be enough for tap water production for about 3,000 local families. 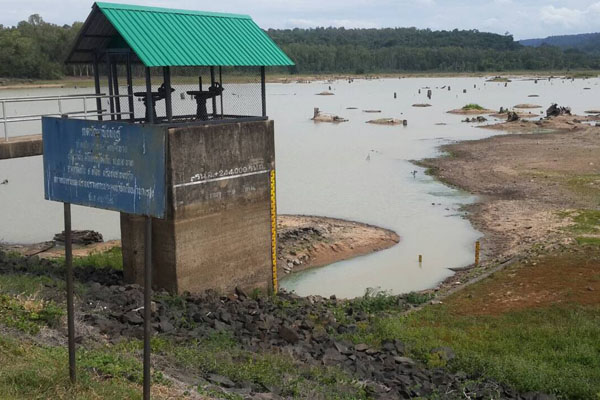 The Khlong Manao reservoir in Buri Ram province is the shallowest it has been in four decades. (photo by Pikool Kaewhawong)