A worker inspects damage at the Thai consulate in Istanbul Thursday. A group of protesters stormed the consulate overnight, smashing windows and breaking in to the offices, where they destroyed pictures and furniture and hurled files out into the yard, to denounce Thailand’s decision to deport ethnic Uighur migrants back to China. (AP photo)

The Thai honorary consulate-general in Istanbul was closed on Thursday after being attacked overnight by a group protesting about Thailand's handling of ethnic Uighurs who fled China. No one was injured.

The daily Sabah Turkey reported that protesters broke into the consulate to denounce a then-unconfirmed report on Thailand's decision to extradite Uighur refugees to China.

The Thai government confirmed Thursday that it had deported 109 Uighurs to China.

It was reported the group gathered in front of the consulate to make a press statement around 11pm local time (about 3am Thai time). Then the protest turned violent and the crowd broke into the consulate building, smashed the windows and lowered the Thai flag. Security authorities later dispersed the group, it reported. There were no injuries reported.

It was the latest in a series of attacks in Istanbul in recent days, mostly by a youth group linked to the national opposition MHP, in protest at Chinese treatment of Uighurs.

A Chinese restaurant, its Turkish owner, and its cook, who ironically is Uighur, was vandalised last week, while a group of Korean tourists was mistakenly attacked in Istanbul's historic Sultanahmet district, according to the Hurriyet newspaper. 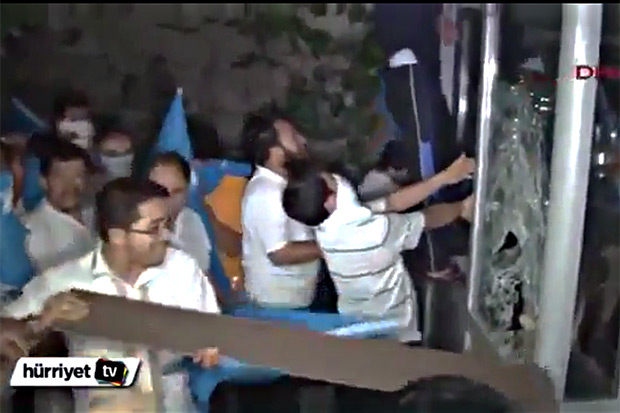 MHP leader Devlet Bahceli, whose party could become the junior coalition partner in the next government, said it was understandable for the protesters to have mistaken the Korean tourists for Chinese, in comments condemned on social media.

"These are young kids. One of them leads, the others follow. What feature differentiates a Korean from a Chinese? They see that they both have slanted eyes. How can they tell the difference," Mr Bahceli told Hurriyet on Wednesday.

"Our nationalist youth are sensitive about the oppression in China. They should be able to exercise their democratic right," he said in an interview with the paper.

A total of 173 Uighurs were detained by Thai immigration authorities for illegally entering the country while fleeing persecution in China's restive northwestern Xinjiang region in March last year.

All of the detained Uighurs claimed to be from Turkey.

However, only those who were able to prove they had Turkish relatives were sent to Turkey.

A source was quoted as saying most Uighur migrants have been sent to Istanbul and Kayseri city, which have large Uighur communities.

Meanwhile, most of the male Uighur migrants are still being detained at an Immigration Bureau holding facility, it was reported.

Several hundred migrants have been detained in Songkhla province since the first group was found on March 13 last year.