Security is beefed up at the Turkish embassy in Bangkok on Thursday morning, after an angry mob stormed the Thai consulate in Istanbul overnight. (Photo by Patipat Janthong)

Thailand is defending its deportation of more than 100 Uighur refugees to China, saying it followed proper, humanitarian procedures despite the condemnation of rights groups.

Thailand's treatment of Uighur refugees was based on humanitarian principles, like Hmong refugees seeking refuge in Thailand.

Thailand had regular meetings with Turkish and Chinese government representatives on how to handle the Uighur refugees. The three countries had agreed that the refugees had to undergo nationality verification, Maj Gen Werachon said.

Nationality verification found that about 170 of the refugees were Turkish, and they had to be sent back to their country of origin. Those Uighurs had been deported to Turkey in June, he said.

His defence of Thailand's actions followed angry scenes in Istanbul, Turkey, overnight, when a mob broke into the Thai consulate in Istanbul to protest against the decision to deport the Uighur refugees to China.

The office of the UN High Commissioner for Refugees said it was "shocked" and considered Thailand's action "a flagrant violation of international law".

"I strongly urge the Thai authorities to investigate this matter, and I appeal to Thailand to honour its fundamental international obligations," Volker Türk, UNHCR's assistant high commissioner for protection, said in a statement. 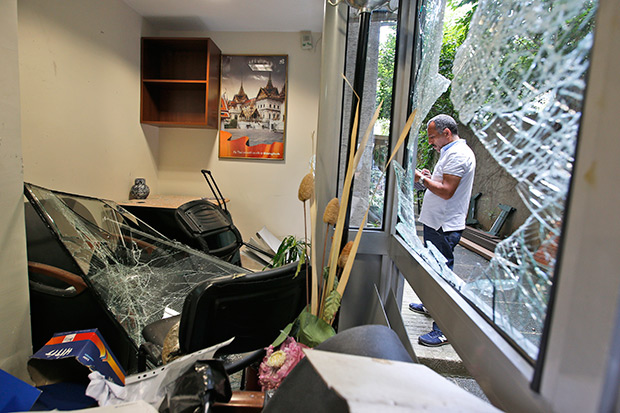 A worker inspects damage at the Thai consulate in Istanbul Thursday. A group of protesters stormed the consulate overnight, smashing windows and breaking into the offices, where they destroyed pictures. (AP photo)

He said such deportations violate the right to protection against return to a country where a person has reason to fear persecution, and has been described by the UNHCR as "the cornerstone of asylum and of international refugee law".

The UN agency said it had repeatedly brought up the matter of the Uighur refugees with the Thai government, and "in response, the agency was given assurances that the matter would be handled in accordance with international legal standards, and that the group would continue to receive protection".

New York-based Human Rights Watch called Thailand's repatriation of the Uighurs an "outrageous rights abuse" and criticised the government for "forcing (them) back to China against their will".

He said the Thai government "broke numerous promises made over the past year to visiting senior officials from the UNHCR and other governments that the Uighurs would not be sent back into harm's way".

The World Uyghur Congress, a German-based advocacy group, said that those repatriated could face criminal charges and harsh punishment, possibly execution, under China's opaque legal system -- the reasons they fled China in the first place. 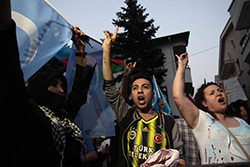 Turkish nationalists demonstrate in front of the Chinese embassy in Ankara, on July 5 to denounce the Chinese government policy on Uighur Muslims. (AFP photo)

China 'will take care of them'

Maj Gen Werachon confirmed Thailand had deported about 100 refugees to their country of origin on July 8. He said nationality verification had confirmed they were Chinese nationals. They were returned there

"Those Uighurs completed nationality verification procedures and are found not to have done anything wrong. The Chinese government will take care of them by providing accommodation and jobs, in line with humanitarian principles.

"Thai authorities have held regular talks on the matter (with China).  We have not done anything to favour anyone or violated any principle. We have followed proper procedures,’’ Maj Gen Werachon said.

There still about 50 Uighurs in Thailand whose nationality could not be verified, he said.

China's position is that the Uighurs left the country illegally.

Prime Minister Prayut Chan-o-cha on Thursday ordered the Foreign Affairs Ministry to take care of about 1,300 Thais and officials now in Turkey following the storming of the consulate office.

Gen Prayut expressed concern over the situation in Turkey, and called a meeting with relevant agencies on Thursday to evaluate the situation there, a source at Government House said.