A man removes broken glass from a window of the Thai consulate damaged by protesters in Istanbul on July 9, 2015. (Reuters photo)

Global anger at Thailand's deportation of more than 100 Uighur refugees to China is mounting, with both the United Nations and the European Union issuing strong statements condemning the action.

The UN Office of the High Commissioner for Human Rights (OHCHR) strongly urged the Thai government not to compound the problem by deporting the 60 Uighur migrants remaining in the country.

"The 109 individuals, who were part of a larger group of more than 350, had been detained in very poor conditions at various immigration detention facilities across Thailand since March 2014, when they were apprehended after leaving China on their way to Turkey," OHCHR spokesman Rupert Colville told reporters in Geneva on Friday.

Despite Turkey's reported willingness to admit them, only 172 of the 350 were eventually allowed to go to Turkey in late June, he said, adding that some 60 others remained in detention in Thailand.

"We strongly urge the Thai authorities to ensure the protection of the 60 individuals who remain in detention and ensure that no further deportation of individuals, including potential refugees and asylum seekers, are made to countries where there are substantial grounds to believe that they would face an imminent risk of grave human rights violations, including torture," Mr Colville said.

"Thailand's deportation of the people of Turkic origin, including women and children, to China is a breach of the principle of non-refoulement, which is a core tenet of international humanitarian law," said a statement issued by Federica Mogherini, the EU High Representative for Foreign Affairs and Security Policy and Vice-President of the European Commission.

Non-refoulement is the practice of not forcing refugees or asylum seekers to return to a country in which they might be subjected to persecution.

The UN High Commissioner for Refugees and the United States earlier issued statements expressing dismay at Thailand's handling of the migrants.

The Thai government has defended its actions, saying the migrants were sent to China after careful checks of their nationality.

Thailand will send a team of observers to China next week to witness how the 109 Uighur returnees are being treated.

Thailand has obligations under the Convention Against Torture and Other Cruel, Inhuman or Degrading Treatment or Punishment and the International Covenant on Civil and Political Rights, the EU statement said.

It also urged Thailand to refrain from sending the remaining people back to China. "The remaining people of Turkic origin should be allowed to depart voluntarily to a country of their choice that is willing to receive them," it said.

The deportation of the Uighur to China led to violent scenes in Turkey when pro-Uighur protesters attacked the Thai consulate in Istanbul with clubs and rocks.

The Thai government said its decisions were based on its immigration protocols which involve nationality verification.

It had earlier sent 172 of the Uighur people to Turkey after verifying they were the citizens of that country.

"We found another 90 are Chinese so we proceeded to send them to China on condition Beijing will treat them fairly and in line with human rights principles," said Maj Gen Weerachon Sukhondhapatipak, a deputy spokesman of the Prime Minister's Office on Thursday.

The Uighur are a Muslim minority in China's far-western region of Xinjiang, but they are ethnically, culturally and geographically closer to the Turkic peoples of Central Asia than to the Han, China's dominant ethnic group. Thousands have fled the escalating violence and perceived abuses in Xinjiang in recent years. 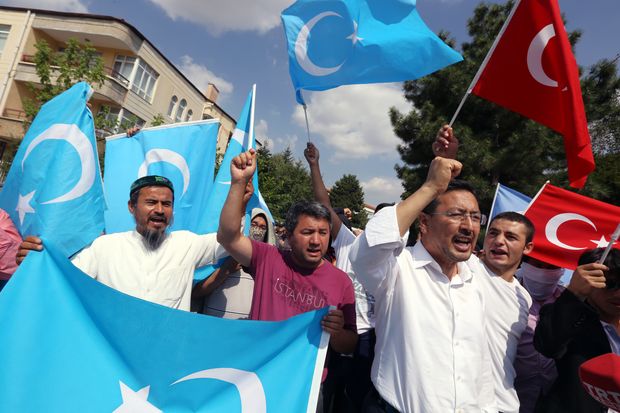 A group of Uighur protesters demonstrate outside the Chinese embassy in Ankara, Turkey, on June 9, 2015. (AP Photo)