Bomb disposal officers inspect a patrol vehicle following a bomb blast in Narathiwat's Rangae district in which one ranger was killed and six others wounded on Tuesday morning. (Photo by Waedao Harai)

One ranger was killed and 10 others seriously hurt in a string of bombings in Narathiwat Tuesday.

The ranger was killed, and six others hurt, when a bomb exploded after they escorted teachers to school in Rangae district around 8.50am today.

The impact of the explosion sent it flying into roadside bushes, said police.

The corpse of Sgt Maj Wattana Muangkaew was found about 80 metres from the blast scene. Six other rangers sustained serious injuries and were sent to Naradhiwasrajanagarindra Hospital.

The explosion left a crater about 1.5 metres deep and 3 metres wide. Pieces of explosive material were scattered across the road.

Bomb-disposal police said the homemade explosive, which used a 50kg gas cylinder, was detonated by batteries.

Capt Sawat Somsri, head of the 45th Ranger Unit, who was among the wounded, said he was travelling to bring six rangers to their outpost after finishing their escort duty. 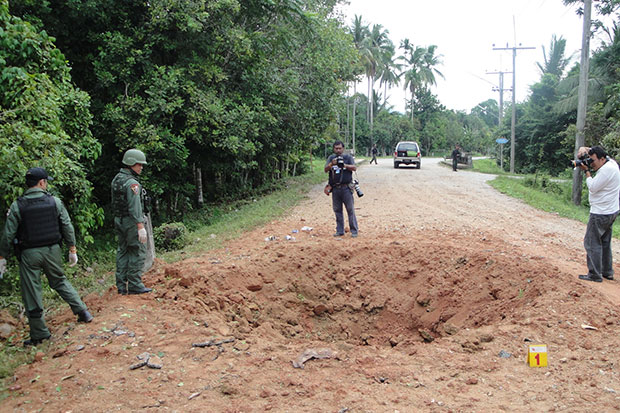 Bomb-disposal officers examine a crater left by a blast in Narathiwat's Rangae district on Tuesday morning. (Photo by Waedao Harai)

In Cho Airong district, six rangers escaped unhurt when a roadside bomb went off at Pileng Nua village around 11am today. They were travelling in a pickup truck when the bomb detonated, said police. The explosion slightly damaged the vehicle.

Around 1.30pm, another bomb blew on a road in Ban Juemae village in Sungai Padi district as a patrol vehicle drove through the area.

The impact of the blast caused the vehicle to skid of the road to hit a roadside tree. Four ranger volunteers on board the vehicle were injured, said Pol Col Suwaroj Lunhawitthanon, superintendent of Sungai Padi district police station.  The injured were rushed to a nearby hospital.