Pubs and restaurants surrounding the University of the Thai Chamber of Commerce (UTCC) have gone quiet as blasting music along the streets was shut off from 9pm. 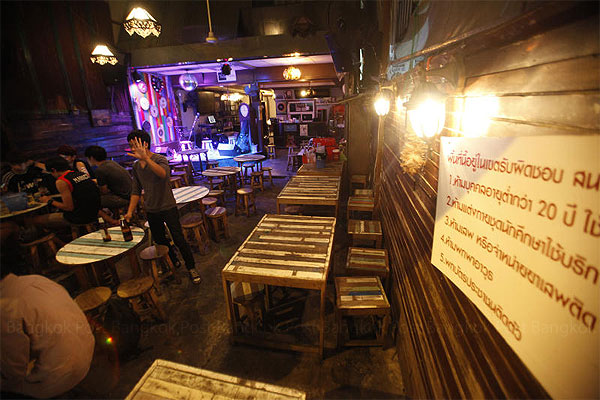 Many empty tables line a bar near the University of the Thai Chamber of Commerce (UTCC) in Bangkok after a government order goes into effect banning the sale of alcohol within a 300-metre radius of universities and vocational colleges. (Photo by  Pattarapong Chatpattarasill)

"Police asked us to close early tonight due to the new law that bans alcoholic drink sales near universities and vocational colleges," said Weerapol Sirikulsing, owner of Sanrak Hut, a liquor outlet near the UTCC.

The alcohol ban is an amendment of Section 44 of the interim charter which was signed by Prime Minister Prayut Chan-o-cha on Thursday.

Under the new restrictions, any pub or nightclub that allows entry for or sells alcohol to people aged under 20, or operates after the legal hours will have its licence revoked, or will be ordered to shut for five years.

Deputy government spokesman Sansern Kaewkamnerd said alcohol sales are banned within 300m of educational institutions under the announcement, and he urged shop owners to strictly follow the order.

Back at the Sanrak Hut, two customers were finishing up their beers as the pub was closing.

Wisut Chokpold, a 21-year-old university student, said he came by the pub about 8pm to unwind after he wrote a long exam, but was informed by the owner that he couldn't order more beer.

"I heard on the news about the new regulations on alcohol sales near institutions of higher learning, but I had no idea that it would be applied this fast," he said.

Mr Wisut said he usually hangs out with friends at alcohol outlets near the university three or four days of the week because he needs to relax after his studies. Having pubs and restaurants located around the campus is convenient.

"It's not a cure-all to solve the problem of under-age drinking because even though all the open pubs are a few kilometres away from here, students who want to drink will still go there," he said.

"If the government doesn't want people in this country to drink, why don't they just shut down all alcohol plants?" Thuwanon Mankong, a 20-year-old university student, said, interrupting Mr Wisut.

Mr Thuwanon said he spends around 1,000 baht on booze each month and he's afraid that under the new rules, his spending on spirits might rise sharply as he will have to pay more on travel costs.

"I'm not okay with the new measures," he said bluntly.

In front of the pub, Chan Boonthan, owner of a roadside fried meatballs stall, said he agrees with the new law.

Almost all of his customers are university students who hang out in bars, but he believes the new restrictions could help tackle alcohol sales near schools and universities.

"I suspect if alcohol outlets around here are closed down, my sales will take a hit. However, as a father I don't want to see my children hang out in a place like this," Mr Chan said.

Similarly, Punnarat Pompatpitchaya, a 20-year-old UTCC student, agreed pubs or nightclubs should not open around educational institutions because it could lure some students in the wrong direction and tarnish universities' image as well.

On another street, Thanadon Thaikul, owner of O-yua Pub & Restaurant near Kasetsart University, said he is considering closing down his 16-year-old business because at the moment 30-40% of the restaurant's income comes from selling alcoholic beverages.

"I used to think that my business is like a cat with nine lives because I've endured many struggles, such as the political protests and the severe floods. Maybe this time I have to give up," Mr Thanadon said.

He said he informed his 200 staff members to prepare for the worst case if the government doesn't review the order.

Meanwhile, a group of more than 80 alcohol outlet owners has called on the prime minister to review the regulation, claiming it will harm the economy and many workers.

The group also voiced concern that key economic zones in Bangkok such as Siam Square near Chulalongkorn University, the Asok area near Srinakharinwirot University, Victory Monument, and tourist destinations in other provinces such as Nimmanhemin Road in Chiang Mai, would be damaged by the regulations.

The only exemptions now are for registered hotels and special entertainment zones, for example, Patpong, Royal City Avenue (RCA) and some areas on Ratchadapisek Road.

"People in the government should think of what would happen if restaurants in Siam Paragon or CentralWorld cannot serve wine, or if Hard Rock Cafe or Khao San Road doesn't have whiskey and vodka.

"The new measures' impact is out of proportion and will force many popular places to go dry," Prommin Phiophet, a spokesman of the group said.