Bidding for the coal-fired power plant in Krabi will go ahead, the Electricity Generating Authority of Thailand insists, even though a joint panel including residents and the government is looking at whether the project should go ahead. 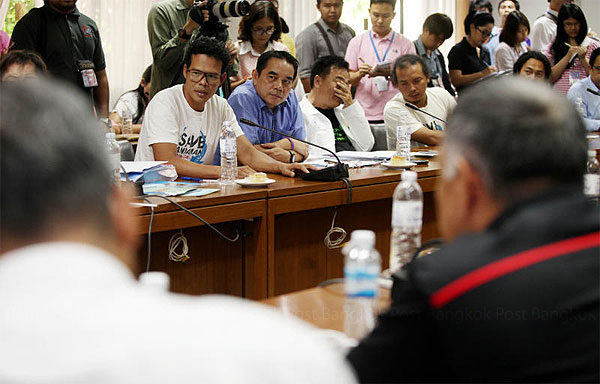 Anti-coal activists sign an agreement in which a panel will be set up to consider turning Krabi into a 100% renewable energy province. (Photo by Thiti Wannamontha)

Maj Anuchart Palakawongse Na Ayudhya, acting director of Egat's Project Environment Division, said Egat must press on with the process because it needs time to prepare the project.

"However, we will not sign any contract that makes a legal commitment until the EIA is approved or until the negotiations between the parties are over," he said.

He was speaking at the Office of the Public Sector Development Commission on Friday. Egat has called the bidding for Aug 5, but the project has hit a potential snag after the government, responding to protesters' demands, agreed to a tripartite panel to look at its feasibility.

The three parties met at the commission for two hours yesterday. Chaired by Gen Jirasak Chomprasop, adviser to the prime minister, the meeting brought together the National Reform Council and National Legislative Assembly (NLA); local communities and academics; Egat, the Ministry of Energy and the Office of Natural Resources and Environmental Policy (Onep).

The government agreed to the panel, comprising all stakeholders, to find solutions to the row over the coal-fired power plant project and renewable energy alternatives in Krabi. Locals say it will harm the environment and their livelihoods.

"We will debate with facts to find solution. However, the result must relate to the nation’s needs for secure energy, balanced against the benefits of locals,'' said Gen Jirasak.

Prasitchai Nunuan, leader of the Save Andaman from Coal Network, said Egat should put bidding on hold. The EIA and EHIA scrutiny procedure should also be delayed until the panel decides if the project should be scrapped.

"There shouldn’t be any progress on Krabi coal-fired power plant during negotiations," he said.

"The panel has to be carried on in a spirit of peace and fairness."

The Onep representative told the meeting he will ask the expert committee to stop work on the EIA and EHIA scrutiny process in the meantime.

Suphakit Nantavorakarn from the Healthy Public Policy Foundation, said he shared concerns over the bidding going ahead, saying there was no reason to rush the project. "The power reserves of the nation, or just the South alone, is still in surplus,” he said.

“The bidding can be suspended. Since the EIA has yet approved, how can the bidder check the project’s specifications?” He questioned Egat’s claim that the bidding would not bring any commitment as bidders would have to see the project’s progress.

Prime Minister Prayut Chan-o-cha insisted the government only agreed to heed proposals raised by anti-coal protesters but has not yet decided to scrap the project. He said a joint effort will be made to find a solution.

If the EIA and EHIA are still before authorities, the process must continue, the premier said. Gen Prayut also said if the project fails the EIA, it cannot go ahead anyway. There is no need to cancel the project now, or it could look as if the government was pressured to do so.

The premier also asked activists who launched hunger strikes against the coal-fired power plant to listen to him now he has accepted the need to hear their concerns.

He said a discussion is needed to determine the necessity of the project. If the project is needed, ways must be found to boost public understanding.

JAKARTA: Fellow villagers have praised an Indonesian man for capturing a crocodile longer than 4 metres (13 ft) on the island of Sulawesi using just a rope.

Thailand recorded about 2.03 million foreign tourist arrivals between Jan 1 and June 26, a government spokeswoman said on Monday, as many pandemic entry restrictions were eased.

A slight drop in coronavirus-related deaths, from 17 to 15, but confirmed new cases were down 27% on Sunday, from 2,378 on Saturday.

Post-pandemic declaration this Friday, not endemic