Villagers are excited by the launch of bung fai (traditional rockets) at the annual Bung Fai Festival in Yasothon province. The rockets are launched in the belief they will ensure plentiful rain for farmers. (Bangkok Post file photo)

Two Royal Thai Air Force pilots on a training flight were forced to return to base Tuesday after high-flying, homemade rockets launched by villagers in Kamphaeng Phet cross their flight path.

Squadron Leader Apiwat Polarsa and his colleague from Wing 46 Airforce Base in Phitsanulok were flying a BT-67 transport at 3,000 feet around 3pm when they saw three bung fai rockets launched Sai Ngam district only 200 metres from their aircraft. The rockets were spotted after the pilots brought the plane down from 10,000 feet.

Sqn Ldr Apiwat reported the incident to his base and decided to call off the training mission.

Air Vice Marshal Mana Prasobsri, chief of Directorate of Civil Affairs, said the pilots were caught unaware by the rockets because the bung fai bamboo rocket festival ended last month and authorities at Wing 46 had not been notified of new launches.

The RTAF asked police to identify the people behind the launch and warn them they could face life imprisonment or even the death penalty under the Firearms and Explosives Act if their rockets caused a plane to crash.

AVM Mana said people must seek permission from local civil and military airports three days before launching any rockets. The bung fai also must not go higher than 5,000 feet and are not travel within eight kilometres of an airport. 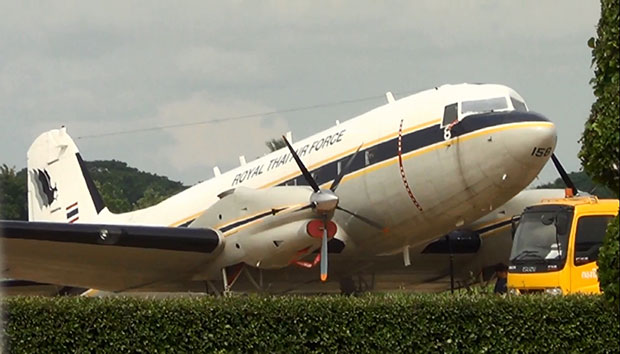 A BT-67 transport plane at Wing 46 Airforce Base in Phitsanulok. (file photo)