Gordon Lake, an American, and his Spanish husband, Manuel Valero, would have been banned from hiring a Thai surrogate to deliver their baby, Carmen, under a law that takes effect Thursday. (Bangkok Post photo)

A new law banning commercial surrogacy takes effect July 30 even as controversy continues to swirl around children born before the law was passed this winter.

Public Health and Social Development and Human Security ministry officials announced Thursday's enforcement of the Protection of Children Born from Assisted Reproductive Technologies Act, which was adopted in February and published in the Royal Gazette May 1.

The legislation was spurred by an Australian couple who were accused of abandoning a baby with Down's Syndrome carried by a Thai surrogate while taking his healthy twin sister. A second high-profile surrogacy controversy erupted when nine babies fathered by a Japanese man using Thai surrogate mothers were discovered in a Bangkok apartment.

Ministry officials said Wednesday that the new law is intended to help married, childless couples have their own children using reproductive technologies and prevent the abuse of such technologies.

A significant change in the law gives biological parents of a child born via surrogacy immediate parental rights in line with family and inheritance laws, Public Health Minister Rajata Rajatanavin said. Under the existing statute, a surrogate mother is considered the legal parent until consents to turning over the child.

Consent has been the heart of the issue for a foreign same-sex couple who contracted with a Thai surrogate who earlier this year delivered their baby girl, but has rescinded permission for them to take the child home.

Gordon Lake, an American, and his Spanish husband, Manuel Valero, say the woman decided not to let them leave the kingdom with their daughter Carmen after she discovered the couple were gay. The couple is currently caring for Carmen in Bangkok, but have not been given the necessary paperwork to leave the country with her.

In an emotional interview on Channel 3 this week, Mr Lake pleaded with the mother, identified only by her nickname Oy, to change her mind. He vowed not to leave Thailand without the child.

Ministry officials said Wednesday that biological parents of surrogate children born before the new law was passed can apply to have it applied to their case. As it bans commercial surrogacy, however, even that would appear to give any relief to the gay foreign couple.

There will be a committee to supervise the imposition of the new law and authorise surrogacy on a case-by-case basis.

The committee will have 15 members, with the permanent secretary for public health as its chairman, and the president of the Medical Council of Thailand as vice chairman, said Dr Boonruang Triruangworawat, director-general of the Department of Health Service Support.

About 60 public and private hospitals in the country were ready to provide surrogacy services, he said.

Couples seeking surrogacy must have their marriage legally registered. Marriages between Thais and foreigners must have been registered for at least three years.

In addition, applicants must be examined by qualified doctors and approved by the committee.

A surrogate mother must be a sibling of one of the biological parents, already have a child of her own, and have the consent of her husband. In a case where prospective parents are both only children, the health ministry rule individually. 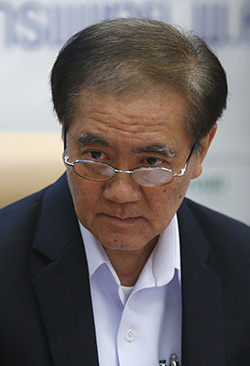 The sperm and eggs used in surrogacy procedures must come from either both parents, or one parent and a donor. Use of the surrogate mother's eggs, however, is prohibited.

Under the law, a doctor who fails to comply with surrogacy standards set by the Medical Council of Thailand can face a jail term of up to one year and/or a fine of up to 20,000 baht. Those caught running a commercial surrogacy business or are hired to be surrogates can face up to 10 years in jail and a fine of up to 200,000 baht.