The navy's white paper on submarines ask you to imagine Thai flags flying where those red ones are - and repeats that neighbours must "be in awe of us". (File photo)

The navy has launched a nine-page white paper on the urgent need to purchase submarines to safeguard lucrative national maritime interests and maintain security during maritime conflicts.

Critics earlier this month condemned the navy's proposal to spend roughly 36 billion baht on Chinese submarines. The white paper, ordered by Deputy Prime Minister Prawit Wongsuwon, appears to be an attempt to drum up public support for the submarines.

Although Thailand will not use the submarines to wage war, other countries' perception is critical, according to assistant navy commander Adm Narongphon Na Bang Chang. "We want other countries to be in awe of us and recognise our potential to take care of the sea," he said.

The proposal has come under fire as Thailand is not involved in territorial conflicts at sea and the Gulf has relatively shallow water levels.

Sceptics were outraged that authorities had agreed to spend 36 billion baht on three S26T Chinese submarines.

Nobody can guarantee if or when a maritime conflict will escalate, the white paper says. "The conflicts, no matter where they take place, will directly affect sea transport."

For example, the South China Sea dispute between China, the Philippines, Brunei, Malaysia, Vietnam and Taiwan is likely to affect sea transport and Thailand must be ready for it, said Adm Narongphon.

Submarines, which can avoid detection and launch attacks from underwater to hit land and sea targets, could protect Thailand's 24-trillion-baht marine assets, which include natural resources, freight shipments, coastal industries and tourist destinations. Even though the Gulf of Thailand is only 50 metres deep, this will not hinder submarine operations because planes cannot see below 20 metres, said Adm Narongphon.

The paper insists Thailand needs to build a new "territorial fence" by reinforcing its military with submarines to protect the 15,000 vessels which travel to and from the Gulf annually. Even if Thailand buys the subs this year, it will be between seven to 10 years before they are operational.

The subs are equipped with air-independent propulsion, which allows the subs to stay underwater for up to 21 days, the white paper says.

Singapore, Vietnam, Malaysia and Indonesia all have submarines and Thailand is lagging behind, the paper says.

"China is offering us a good package," said Adm Narongphon. 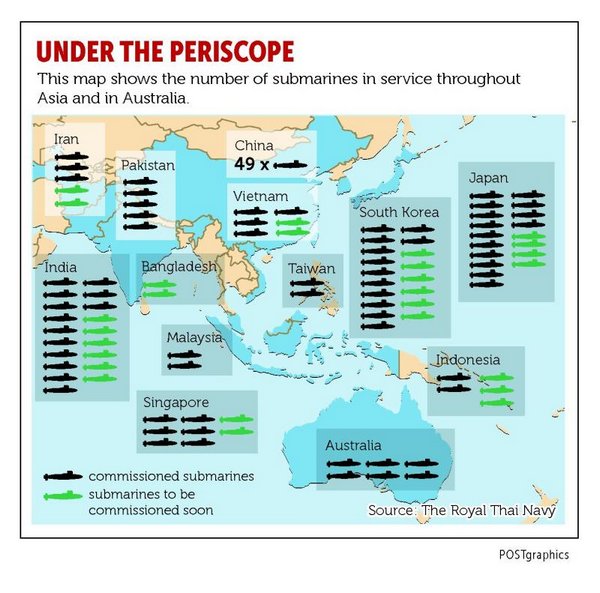