The NBTC has spent 40 million baht to promote its prepaid registration campaign, offering 60,000 service points to assist users but around 17 milllion prepaid mobile users have failed to registered after the deadline ended on Friday, July 31. (Photo by Wichan Charoenkiartpakun)

The telecom regulator will ask the government if it can extend the July 31 registration deadline by another three months after 16.9 million people have failed to register prepaid SIM cards used in their mobile phones.

Prawit Leesathapornwongsa, a member of the National Broadcasting and Telecommunications Commission (NBTC), said on Saturday that his agency was in the process of seeking opinions from the government on whether the deadline could be delayed.

While the NBTC is waiting for the answer from the government, the final date for registration was still July 31, Mr Prawit said.

The cabinet approved the regulation requiring all mobile users to register their prepaid SIM cards earlier this year as part of the national security agenda. Several bombings in the South have been triggered by mobile phones with such SIM cards.

Starting on Saturday, those failing to register subscriber information cannot make outgoing calls, use the internet or send text messages. They can still take incoming calls and dial a few emergency numbers. Throughout this month, they will hear a registration reminder whenever they use the phones.

If they register within August, they can continue to use their SIMs normally with no penalty or charges to their remaining credits.

NBTC secretary-general Takorn Tantasith urged the 16.9 unregistered prepaid mobile users to register their personal information at more than 60,000 service points nationwide, including those at 7-Eleven stores, by Aug 31 so that their SIMs are fully functional again.

Of the total 16.9 unregistered numbers, Mr Takorn said around 7-8 million were used regularly while the rest were inactive users. 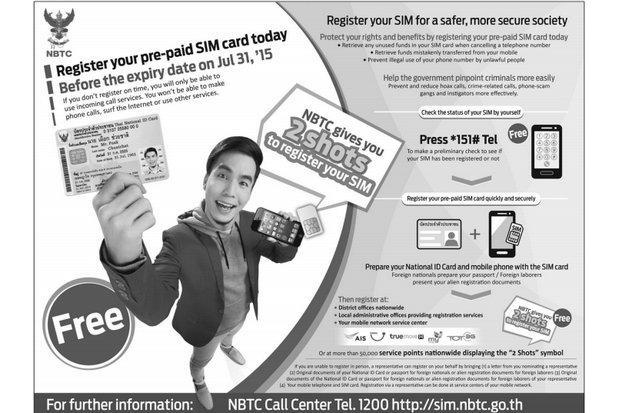 TOKYO - Hurdler Jasmine Camacho-Quinn claimed Puerto Rico's first Olympics athletics gold on Monday but Belarusian sprinter Kristina Timanovskaya was absent from the women's 200m after claiming her country had forced her to leave the Games.