A high-speed train based on this model will supposedly be running between Bangkok and Pattaya within five years, and then extended to Map Ta Phut industrial area and port in Rayong. (Photo by Thanarak Khunton)

CP met him late last month and reaffirmed the company's interest in developing the 194km Bangkok-Pattaya-Rayong project, ACM Prajin said. The group plans to submit its investment plan for the 150-billion-baht project to the Transport Ministry this month, he said.

Bangkok-Pattaya-Rayong is one of two high-speed train routes planned. The other is the 211km Bangkok-Hua Hin route, worth 98 billion baht. Thai Beverage Plc (ThaiBev) has shown interest in investing in that route, the minister said.

ACM Prajin said the ministry is asking the Secretariat of the Cabinet whether it can submit the Bangkok-Pattaya-Rayong rail project to cabinet for approval ahead of its environment impact assessment (EIA) report. 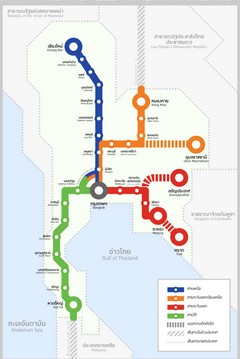 The State Railway of Thailand (SRT) has yet to get the EIA report and the minister has instructed transport permanent secretary Soithip Traisuth to work with the Natural Resources and Environment Ministry to speed it up.

The EIA report for the Bangkok-Hua Hin route, prepared by the Office of Transport and Traffic Policy and Planning, is finished and now being reviewed by the National Environment Board.

"The cabinet will be asked to set conditions that bids can be called only when the EIA report is endorsed," he said.  Bidding is expected to take place in June next year while construction will take netween 30-36 months, he said.

SRT governor Wuthichart Kalyanamitra said the EIA report should be ready this month and later will be sent to the Natural Resources and Environment Ministry for review. He said slow design work has delayed the report. The track passes mountains and river basins and parts of the route also overlap with the Thai-Chinese rail road project linking Map Ta Phut in Rayong and Saraburi's Kaeng Khoi district.