Security guard firms to be regulated

A security guard checks the trunk of a car at MBK shopping centre in Bangkok in April 2015. (Bangkok Post file photo)

A bill to regulate the security guards sector is scheduled to be deliberated by the National Legislative Assembly in the third reading on Aug 6, <i>Post Today Online</i> reported.

The bill sets standard requirements for companies providing security services and qualifications for obtaining a permit to work as a security guard.

The legislation also sets up a committee to oversee the security guards business.

The Bangkok metropolitan police chief will be a member and secretary of the committee.

The committee will also have six resourceful members. They must be representatives of the private sector with responsibilities involving security services.

Under the legislation, a company offering security guard services must obtain an operating licence valid for four years which can be renewed.

A security guard must have completed Mathayom 3 (Grade 9) education or higher. He or she must hold Thai nationality and must pass a course, to be designed by the Royal Thai Police Office, at an approved training centre.

A security guard will be required to obtain a licence to work which will be valid for three years, and extendable after an assessment of past performance.

They must never have been given a jail term for physical or sexual assault, gambling or drugs.  All security guards on duty will be required to wear a uniform and insignia.

According to RTPO data, there are 250,000 to 300,000 security guards throughout the country and 60%. of them finished only Prathom 6 education and 15% Mathayom 3, with 15% having a higher level of high school education. There is no information on the other 10%. 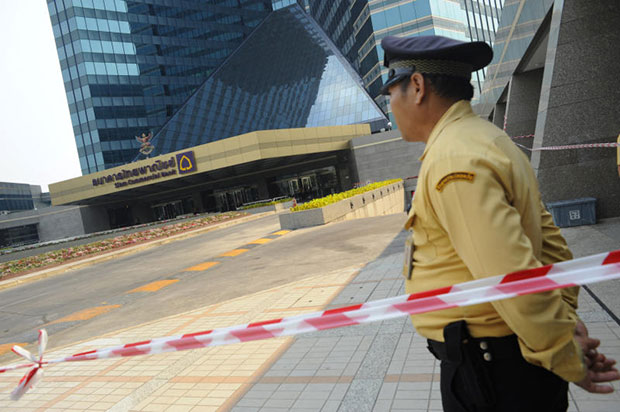 A security guard on duty at the headquarters of Siam Commercial Bank in Ratchayothin area of Bangkok. (Bangkok Post file photo)