The fish raised by farmers in Trat have died due to an unknown cause. (Photos by Jakkrit Waewkraihong)

Officials in Trat province are trying to determine what caused a mass fish die-off in a Muang district canal. 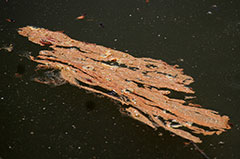 Yellow liquid found in the canal is suspected to have caused the fish kill.

Fish, crab, shrimp and other marine life died in the Khlong Son canal over the past 24 hours. Boonnote Phumanee, head of Saphan Hin village, went to the waterway Tuesday morning after residents reported the strong stench of fish as far as a half-kilometre away.

In the upper section of the canal, which flows into the sea, some Asian sea bass and grouper raised in baskets also died.

Fish raisers said they suspected water in the canal, which had turned reddish brown, caused the fish to die. Residue of a yellow liquid were found covering the beach for about 200 metres and in the sea. It was not yet known where the liquid came from.

The village headman said water samples would be taken for testing.

Some villagers alleged the reddish-brown water was from a shrimp farm owned by a high-level police officer, but that had not been confirmed, Mr Boonnote said.