Thannicha Nampanya and Nitikarn Chotthanapongsathit, appear at a police news conference in Ayutthaya on Saturday after reporting to face charges stemming from their dance video. (Photo by Sunthon Pongpao)

Two women who starred in a video of a racy dance staged inside Wat Chaiwatthanaram in Ayutthaya reported to police on Saturday to face charges of violating ancient monuments legislation.

They have been charged with violating Section 13 of the Ancient Monuments, Antiquities and National Museums Act for actions deemed to cause damage to morals or insult to religion and culture, and for actions that jeopardise peace and order in public areas. The offences carry a jail term of up to one month and/or a fine of 10,000 baht, said police.

The video clip of two women in short red dresses gyrating to music inside Wat Chaiwatthanaram, part of a Unesco World Cultural Heritage site, drew the wrath of the public and the authorities. The five-minute clip was uploaded to YouTube by a user named VKIZZ on Aug 5 and has since been labelled "private".

Ms Thannicha and Ms Nitikarn confessed to having danced inside the historic temple on an evening in early July. They apologised to the public and Ayutthaya residents for their actions, saying they were just having fun and were not aware of the consequences. 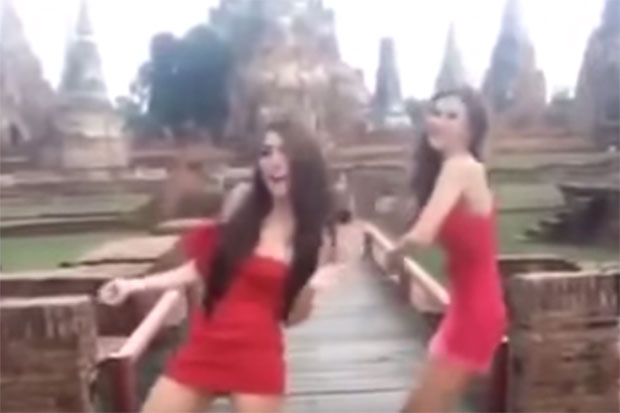 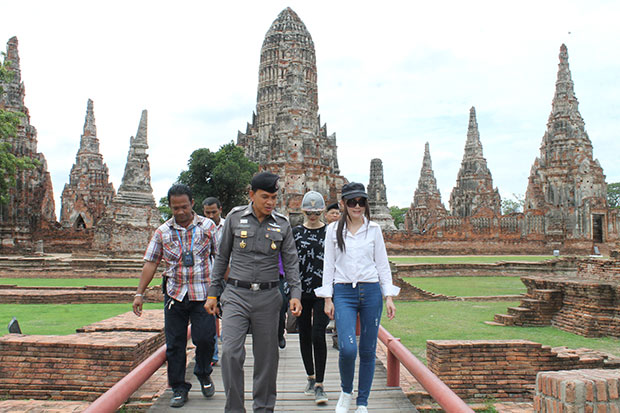 A police officer escorts Thannicha Nampanya and Nitikarn Chotthanapongsathit to Wat Chaiwatthanaram for a re-enactment of the actions that outraged many people. (Photo by Sunthon Pongpao)