The flaming wreckage of motorbikes litters the Ratchaprasong intersection in Bangkok after a bomb exploded inside the Erawan shrine complex Monday, killing 19 and injuring 123. (Photos by Pattarachai Preechapanich)

A bomb explosion inside one of Bangkok’s most popular tourist attractions killed at least 19 people and injured 123 others – mostly foreign tourists – on Monday.

Of the 19 dead victims, 12 died at the scene. The figures were based on information released by the Royal Thai Police Office as of 11.20pm on Monday.

An improvised explosive device placed inside the Erawan shrine complex at the Ratchaprasong intersection detonated at 6.55pm. The scale of the explosion set motorbikes and taxis ablaze inside the intersection and bowed the iron fence of the Hindu shrine outward.

Casualties were immediate, with body parts scattered across the area, leaving broken glass and the smouldering wreckage of burned-out motorcycles behind.

Military and police, including national police chief Somyot Pumpanmuang, rushed to the scene. Military explosive ordnance-disposal technicians checked two suspicious objects there and confirmed they were not bombs.

The BTS remained open throughout the ordeal with only the Ratchaprasong Skywalk closed. The nearby Siam Centre and Siam Paragon malls closed early at 9.30pm but announced they will open as normal Tuesday. The Skywalk between the BTS Chidlom and Siam stations will remain closed Tuesday. 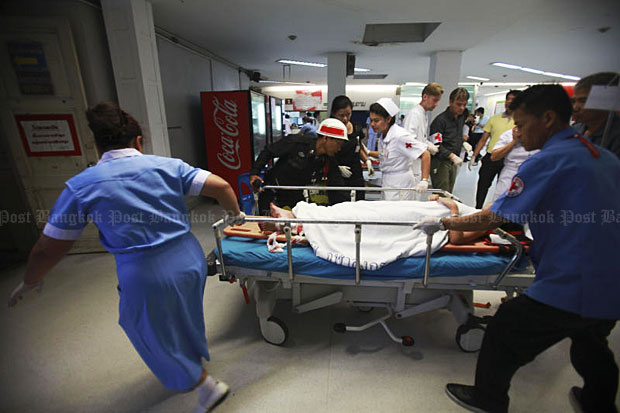 Photo of a patient arrive at the emergency room at Chulalongkorn Memorial Hospital. (Photo by Taweechai Tawatpakorn)

Prime Minister Prayut Chan-o-cha denied rumours he had declared a state of emergency and ordered schools and businesses closed Tuesday. The Bank of Thailand also declared a rumour that it would call a bank holiday on Tuesday, according to Ronadol Numnonda, assistant governor of the supervision group.

The Bangkok Metropolitan Administration announced around 10pm, however, that all 438 city schools would be closed Tuesday for safety reasons. Triam Udom Suksa and Materdei schools standing in the vicinity of the explosion scene would be closed on Tuesday too.

Deputy Prime Minister and Defence Minister Prawit Wongsuwan expressed condolences to the families of the dead and injured victims. He said it was too soon to say if the attacks were politically motivated or terrorism.

"But it was clear that the perpetrators intended to destroy the economy and tourism, because it occurred in the heart of (Bangkok's) business district," Gen Prawit said, condemning the act.

It was clear, he said, human casualties were the goal of the attack.

But Defence spokesman Kongcheep Tantrawanich said later the bombing was “the work of those who have lost political interests and want to destroy the ‘happy time’ of Thai people. It’s an attempt to ruin Thailand’s tourism image and cause damage to the country’s business sector.”

The incident targeted the lives of innocent people in a public venue, Maj Gen Kongcheep said, adding similar violent incidents have occurred in Bangkok and other provinces in recent years.

“The group behind the bomb must stop the savage act done to their fellow Thais and stop hurting the nation,” Maj Gen Kongcheep said.

Police said the IED that exploded inside the shrine area was composed of three kilogrammes of TNT stuffed in a pipe and wrapped with white cloth. Its destructive radius was estimated at 100 metres. Authorities quickly recovered an electronic circuit suspected to be part of the device about 30 metres from the blast scene.

Purported video of the blast from CCTV cameras was posted to Facebook after 8pm.

Most of those injured in the explosion were said to be predominantly Asian tourists, with the majority taken to Police General Hospital and Chulalongkorn Memorial Hospital, both of which were appealing for blood by 8.45pm.

The Japanese embassy said it is rushing to confirm whether any Japanese were caught in the blast.

Security officials initially cordoned off the bomb site for a radius of 200-300 metres to facilitate investigation. Police said the area was cleared of bombs, but will remain off limits to the public for thorough checks.

He condemned the bombing and said it was apparently intended to kill people and damage property because it was set to detonate when the shrine was crowded. 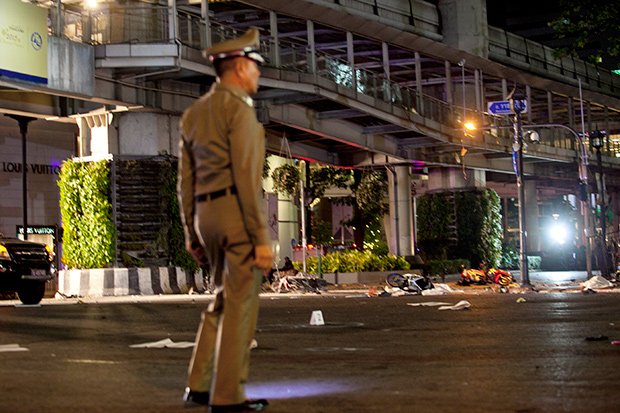 Ousted prime minister Thaksin Shinawatra tweeted on his @ThaksinLive account at 11.22pm that he was now in Berlin and he was appalled and saddened by the deadly bomb attack at Ratchaprasong.

"I condemn in the strongest possible terms the attack," he wrote.

He urged concerned authorities to work with local and foreign experts to bring the culprits to justice as soon as possible.

The Hindu Erawan shrine, on a busy corner near top hotels, shopping centres and offices, is a major tourist attraction, especially for visitors from East Asia. Many ordinary Thais also worship there.

The Ratchaprasong intersection where the bombing occurred has been the site of massive political protests in the past decade and a target for bombers.

Two bombs on the Ratchaprasong Skywalk outside the nearby Siam Paragon shopping mall in February injured two people and are believed to have been politically motivated. A car bomb exploded in the parking garage a Central Festival Koh Samui in April. 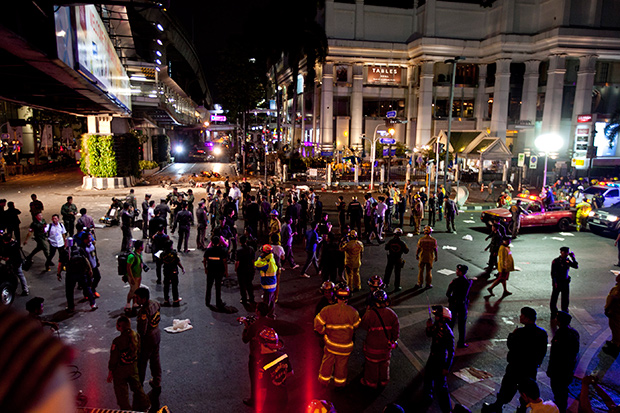 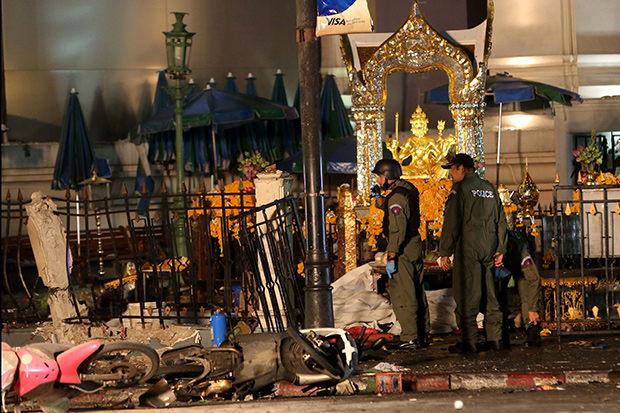 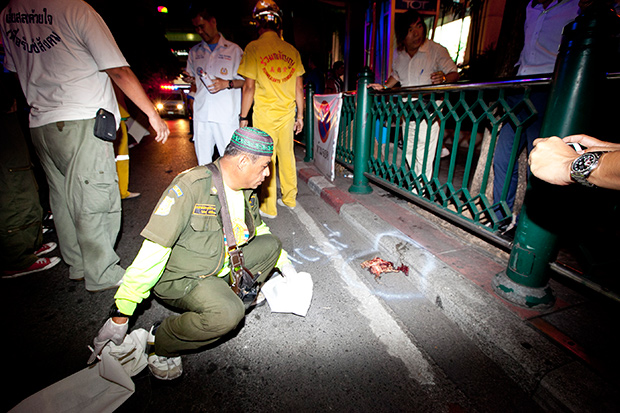 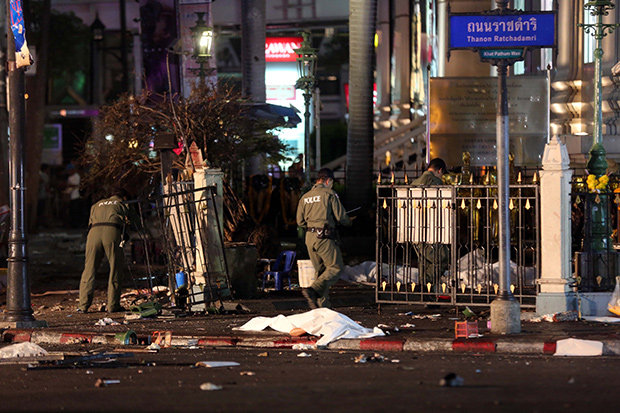 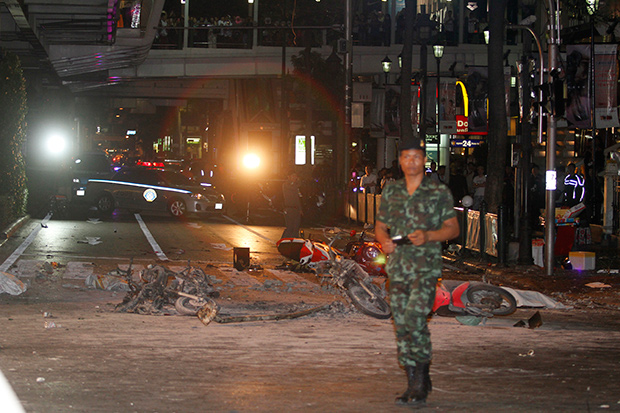 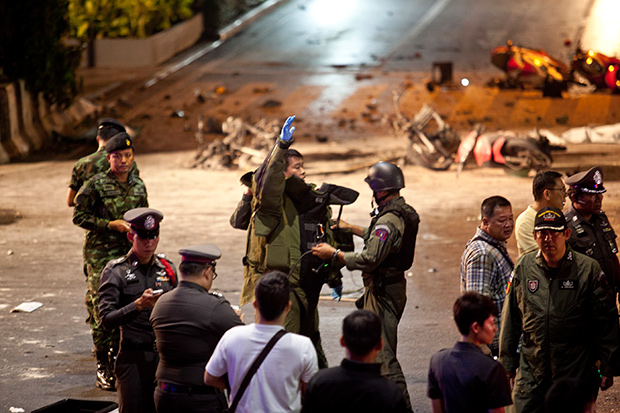 Assistance will be provided for JSL Global Media employees who were abruptly laid off without fair compensation, Labour Minister Suchart Chomklin said on Monday.

PARIS: French President Emmanuel Macron on Monday reshuffled his government in search of a fresh start for his second term, dogged by his failure to win a parliamentary majority last month.

CANAZEI, Italy: Rescuers warned Monday that hope of finding survivors was diminishing after an avalanche set off by the collapse of an Italian glacier during a heat wave killed at least six people.