Relatives struggle to cope with grief

Kin demand the government swiftly hunt down culprits behind attack

People joined a candlelight vigil Tuesday evening near the Erawan Shrine to mourn the dead. (Photo by Patipat Janthong)

Heartbroken relatives of the victims killed in Monday's bomb blast turned up Tuesday to claim the bodies of their loved ones and try to deal with the shock of the tragedy.

For Neoh Hock Guan, the pain was unbearable as four members of his family died, while another is still missing, after they went to visit the Erawan shrine on what was to have been the last night of their Thai holiday before heading home to Penang, Malaysia.

Mr Neoh, who arrived in Thailand on Saturday with six of his relatives, spent Tuesday going from hospital to hospital to identify their bodies. At Chulalongkorn Hospital's Forensic Medicine Unit he found the body of his five-year-old niece, Lee Jing Xuan. Earlier in the day he found his wife Lim Saw Sek, his son Neoh Jai Jun, and his son-in-law Lee Tze Siang.

Mr Neoh, who was in a state of anguish, said only he and his seven-month pregnant daughter Ee Ling were safe. After the bomb went off he left his daughter at Ramathibodi Hospital and hurried to search for his other family members but to no avail.

He declined to say any more but his friend said Mr Neoh is still looking for his wife's sister Jessee Lim who is missing. His pregnant daughter escaped injury because she could not bear the smoke from joss sticks at the shrine and walked away from it. Mr Neoh followed and suffered only minor injuries to his legs.

They were at the shrine for only 10 minutes before the bomb exploded. Luckily for him, Mr Neoh was stood the other side of the shrine which shielded him from the impact.

Napue Sae Lee, a 33-year-old hilltribe woman from Chiang Rai, was also at Chulalongkorn Hospital, to identify the body of her sister, Namouy Sangchan, 30.

"Namouy told me on Monday that she would go to the shrine with friends in the evening. That was the last time I talked to her. I never thought something like this would happen," Ms Napue said.

She called on the government to quickly find the culprits who committed the crime, saying that she now felt less safe living in the capital. She was waiting for hospital approval to retrieve her sister's body for funeral rites.

Dr Udomsak Hoonwijit, head of the Forensic Medicine Unit, said he found ball bearings in the bodies of dead victims taken to his hospital. "Ball bearings were put into the bomb to kill more people. The victims I saw died from the ball bearings rather than the impact of the blast," Dr Udomsak said. 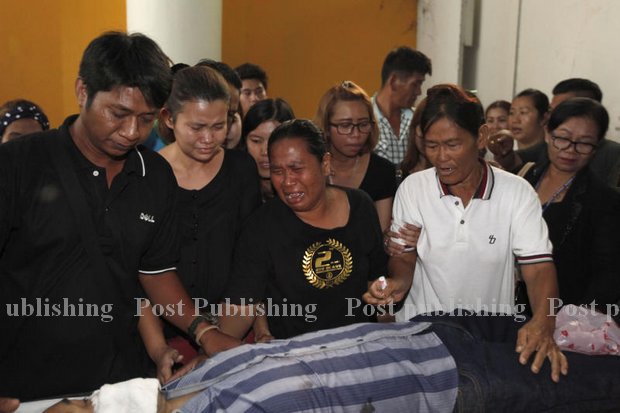 Relatives of Ratchaprasong bomb victim Suwan Satman burst into tears Tuesday while retrieving his body from the Institute of Forensic Medicine. (Photo by PattanaPong Hirunard)

He explained that his forensic team was making a record of injuries to all patients suffered as a result of the explosion and he will submit this information to police.

The hospital was packed with Chinese tourists who came to find their relatives. There were also many Mandarin-speaking volunteers who came to help translate for the medical staff.

Chulalongkorn Hospital said there were 27 victims at the hospital -- 14 men, 10 women and three girls. There were nine Thai nationals, 10 foreigners and eight whose nationalities were unconfirmed.

The hospital had already discharged six people though 18 were still being treated. A source said five of them are in a coma.

The Police General Hospital's Institute of Forensic Medicine, which sits across Ratchaprasong intersection where the bomb exploded, was also mired in gloom Tuesday. It was filled with the relatives of bomb victims waiting to claim the bodies of their loved ones.

Kanthong Satman, 60, rushed from her home in Ratchaburi after being told by a colleague that her son Suwan, 30, a worker at the Erawan shrine, had sustained severe injuries in the explosion and was being treated at the Police General Hospital's emergency room.

When she arrived Ms Kanthong was informed her son had died.

"They [the bombers] have total disregard for victims' families. This is murdering innocent people," Ms Kanthong said, adding, "Suwan has worked hard to take care of his family, especially his six-year-old son."

Pakkapon Singror was also waiting to claim the body of his brother Yutthanarong Singror, 44, who was killed at the scene.

He said Yutthanarong was on his way to deliver a document to a customer at a department store at Ratchaprasong intersection.

He called on the government to swiftly track down the culprits.