Couple planned to wed after six happy years together, but blast shatters dream.

In a millisecond of violence, planning for a lifetime of happiness disappeared as a bomber killed Kritsuda's fiance and turned life to tragedy forever. (Photo by Chanat Katanyu)

Yutthanarong Singlor, 38, was among the 20 people killed in Monday's bomb blast at the Erawan shrine.

Funeral rites are being held for Yutthanarong at Wat Bang Na Nai, with family and friends preparing to say their final farewells.

He worked as a messenger for a private firm in the Sukhumvit area. At 6pm he got on the BTS to deliver a package to a company client at CentralWorld shopping mall.

His girlfriend, Kritsuda Narongplien, 30, was expecting to see him at home 30 minutes after getting a call from him at 6.45pm. He was done for the day and was about to take the BTS back to his workplace.

When she couldn't contact him half an hour later, she thought his phone battery must have run out. It was a sleepless night for her.

The next morning she got a call from his brother telling her to come to the Police General Hospital. She still did not suspect anything serious. A car accident at worst.

When she arrived at the hospital, her entire world collapsed.

"I was trying to call him all night that night. The next morning his brother called me. He already knew about it [his death] but couldn't bring himself to tell me what had happened. 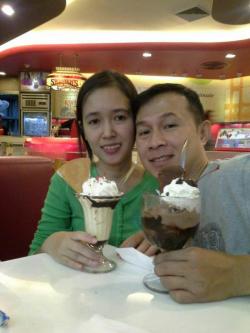 "He asked me to go to the hospital together. I thought it was a minor accident. The thought of him being killed never occurred to me. At the hospital it was too much to bear," Ms Kritsuda said.

According to Ms Kritsuda, she and Yutthanarong were planning to get married after six years of living together. Her family, who had thought he was not ready for a serious relationship because of their age difference, had been proved wrong.

"My parents were concerned he wouldn't take the relationship as seriously as I did. We were allowed to live together but asked not to have a child. We planned to get married and have a child. He wanted a baby girl," Ms Kritsuda said.

Yutthanarong had two jobs, his messenger job and as a motorcycle taxi driver. He woke up at 5am to make extra money with the taxi work and every morning he dropped her off at her office first before going to his own.

He earned about 1,500 baht a day working as a motorcycle taxi driver and from extra jobs. They had some savings and had bought a plot of land covering 100 square wah in Saraburi, close to her parents' home.

"It was my idea to live close to my parents. They are getting old. He never opposed it even though he would have had to change jobs," she said.

Ms Kritsuda said Yutthanarong managed to win the hearts of everyone in her family through his thoughtfulness and generosity.

Ms Kritsuda said Yutthanarong not only took good care of her, but he had been a good influence on her. She had become more patient and mature.

She said over the past six years when they had an argument and she became emotional or irrational, he would wait for things to calm down.

"Everyone says I'm changed and I know I am changed because of him. It was a gradual change," she said.

Phakkhaphol Singlor, 44, Yutthanarong's brother, said he was contacted by a staff from the Police General Hospital to collect the body on Tuesday morning.

He called on the state to help his brother's family especially his two sons, Supawich and Natthawut, from an ex-wife.

"He was the breadwinner. He had two small children. As a family member of the victim, I am pleading with the government, the military and the police to do their best to hunt down those responsible for the blast," he said.