Can we have some more?
Thailand
General

Can we have some more?

North Korea's Foreign Minister Ri Su-yong recently paid an official visit to Thailand, the first senior government member from the reclusive country to travel to the kingdom in a decade. The last was then foreign minister Paek Nam-sun in 2005. 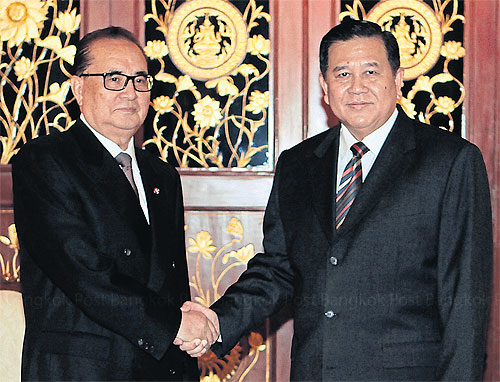 His visit was intended to mark the 40th anniversary of diplomatic ties between the two  countries.

Mr Ri, in fact, arrived in Bangkok a couple of days before his official trip began. The minister from the hermit kingdom was scheduled to go on private visits to royal projects, including the Doi Tung shops and agricultural development programmes.

A source in the Foreign Ministry said the North Korean minister planned to take back home useful information he obtained from the farm development programmes. North Korea relies mainly on farm products.

Speaking just days before being replaced as Thai foreign minister, Gen Tanasak Patimapragorn told the media that North Korea had invited more Thai investors to do business in the communist country. In return, Thailand has offered to be a bridge linking North Korea and the international community in the event of a conflict.

The move, according to government sources, is in line with a request by Washington in May for Thailand to persuade North Korea to return to the Six-Party Talks to support the goal of denuclearisation.

US Undersecretary of State Rose Gottemmoeller has repeated the US stance that the door to dialogue is still open to North Korea as efforts continue to get it to eliminate its nuclear programme. “We are going to judge North Korea by its actions, not words,” she said.

Looking closer to home, Gen Tanasak said outstanding issues yet to be resolved between Bangkok and Pyongyang include a rice-debt payment owed to Thailand and the disappearance of Thai woman Anocha Panjoy, who is believed to have been abducted and taken to North Korea in 1978.

Other bilateral and regional issues were also discussed at a high-level meeting with Mr Ri in Bangkok. However, details of talks on some issues have been kept under wraps, particularly the rice debt.

A government source said Mr Ri raised the rice issue for discussion with Thai authorities. However, he stopped short of touching on the debt that had to be settled.

Instead, he told Gen Tanasak that North Korea wanted to buy more rice from Thailand. Mr Ri’s proposal would have been good news for Thailand had North Korea agreed to pay the outstanding rice debt, or at least part of it.

The sources did not elaborate how Gen Tanasak responded to his counterpart’s request to buy more rice, but said the proposal was passed to the cabinet with a committee possibly being set up to consider the matter.

“It is not the best idea to enter into another rice deal with North Korea when the old account remains unsettled. The government should be careful,” the source said.

Aside from the rice issue, the abduction case was also highlighted in the talks. However, the North Korean minister reiterated that Ms Anocha was not abducted and spirited to North Korea.

He maintained the information released by former US serviceman Charles Jenkins that he had seen Ms Anocha in North Korea was propaganda engineered by the United States and Japan to defame his country.

Order in the court

There are 10 newcomers in the line-up endorsed by His Majesty the King and published in the Royal Gazette on Thursday afternoon. 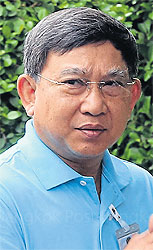 No military members have been removed but some have traded positions. Two former military ministers were moved to deputy prime ministerships. They are former transport minister ACM Prajin Juntong and former education minister Adm Narong Pipatanasai.

Gen Paiboon, the only military member not affected in the cabinet shake-up, is also in charge of the National Council for Peace and Order’s (NCPO) justice and legal affairs division.

Concurrently serving as deputy supreme commander, Gen Paiboon will retire at the end of next month.

Since becoming justice minister, he has assumed the duties of enforcing the law with alacrity, tackling a myriad of problems involving crime, corruption and social issues head-on.

At the urging of Gen Paiboon, Prime Minister Prayut Chan-o-cha has invoked his special powers under Section 44 of the interim charter to tackle illegal street racing, alcohol sales near schools and universities, and illegal nightspot operations.

Bar and club operators have slammed the harsh penalties imposed by the order, including a five-year ban on pubs allowing entry to people aged under 20, saying that tens of thousands of jobs could be lost.

The measure may prove unpopular with the operators but the wider public has thrown its support behind the move.

The Justice Ministry under Gen Paiboon has also made serious efforts to stamp out drug operations run by inmates from within prison walls. Prison officials who fail to measure up are being transferred, while more funds are being allocated to the Corrections Department to solve the problem.

With Gen Paiboon at the helm, the ministry has worked even more closely with neighbouring countries to crack down on drugs being smuggled into the country.

Several agencies under the Justice Ministry which handle cases relating to corruption, such as the Anti-Money Laundering Office and the Public Sector Anti-Corruption Commission, have made considerable progress in their investigations.

The latest highlight was the move to strip former prime minister Thaksin Shinawatra of his police lieutenant colonel rank. Over recent years, different agencies and administrations have tried to distance themselves from the issue.

Ordered by Gen Prayut to take care of the matter, Gen Paiboon immediately called a meeting to discuss it. It was attended by representatives from the Royal Thai Police (RTP) and the Council of State, and within three short days the meeting agreed to strip Thaksin of his police rank last week.

"He has been self-disciplined and scrupulous since he was a child. This was influenced by his parents who were teachers who upheld such values," a source close to him said.

Reporting directly to Gen Prayut, Gen Paiboon is a key member of the NCPO who has played a crucial role in supporting the junta’s work, and his contributions have impressed the prime minister, the source said.

Demands of the job

Running a ministry is no easy job and it can take a toll on those who occupy a ministerial seat. Former transport minister Prajin Juntong is no exception.

After more than a year in the highest post in what many regard as an “A-list” ministry, ACM Prajin exited after the cabinet reshuffle this week, with quite a few grey hairs and a look of weariness.

The reshuffle was royally approved on Wednesday and published in the Royal Gazette with immediate effect on Thursday.

He has moved up a rung to deputy prime minister and it is speculated he will formulate transport-related policies, an area he is now familiar with.

The former air force chief is among the military brass enlisted by Prime Minister Prayut Chan-o-cha to control the ministry, which is one of the biggest beneficiaries of state budgets.

The ministry deals with multi-billion-baht projects listed for the massive infrastructure overhaul. The high-speed rail projects alone amount to almost a trillion baht.

With such a heavy responsibility, ACM Prajiin needed time to adjust to life outside the barracks — it was a 180-degree change to his normal working environment.

From being a commander-in-chief whose orders are promptly obeyed, he became a minister who needs to work in cooperation with senior bureaucrats.

Ministry sources said ACM Prajin did his homework before taking up the job, studying the organisational structure of the ministry. A no-nonsense type, he wanted everything to run like clockwork, and for such a vision to be successful, he asked that progress reports on important projects be presented to him at least twice a month.

His requests were not always delivered on time, leaving him frustrated.

Adding to his concerns was the unresolved International Civil Aviation Organisation (ICAO) saga. The ICAO’s fears about the level of aviation safety in Thailand have put the ministry on the spot. It needs a firm hand to resolve it.

The aviation safety issue, which threatens to ground some commercial flights in the future if it fails to be dealt with properly and by a deadline, posed a headache for ACM Prajin. He admitted a plan to address the safety concerns is likely to be delayed and further inspections by the UN agency are unlikely to be completed before the end of the year.

ACM Prajin explained the delays are being caused by a shortage of personnel to train the Department of Civil Aviation’s staff to carry out inspections and certification of 28 new airlines.

However, ACM Prajin refused to be daunted as he ordered the formation of a sub-committee to bring about a speedier conclusion to the problems.

The sub-committee — the seventh of its kind — will look into issues raised by the ICAO with the Department of Civil Aviation and will also speed up plans to set up a command centre to tackle the problems.

A ministry source said ACM Prajin does not beat around the bush and likes everyone he works with to cut to the chase at meetings.

But with more than a few loose ends to tie up, particularly regarding the ICAO issue, there appeared to be several things he could not address within the time frame he set.

The constraints clearly bothered him. He was heard to complain that as transport minister, he could get only three hours of sleep on average.