In June, 2011, Bangkok Governor MR Sukhumbhand Paribatra installed the 10,000th closed-circuit TV camera at Victory Monument, and more have been added. But as police revealed Monday, many are fake or faulty, with 15 of the 20 CCTV cameras along the route of the fleeing Erawan shrine bomber unable to capture helpful video. (Bangkok Post file photos)

Most of the security cameras installed along the escape route used by the suspect in the Erawan shrine bombing were broken, which is hindering the investigation into the incident, according to the police chief.

National police chief Somyot Poompunmuang said Monday 15 of the 20 cameras from Ratchaprasong intersection to Silom were out of order.

The cameras are owned and maintained by the Bangkok Metropolitan Administration.

Pol Gen Somyot said the images obtained from the five working cameras do not give his men a complete picture of the incident. "The footage jumps around from one camera to another. And because some of the images were not available due to the broken cameras, we have had to rely on our own imagination," the police chief said.

Police last week released a sketch of the prime suspect seen on CCTV footage leaving a rucksack at the Erawan shrine 15 minutes before the explosion.

A male suspect in a yellow T-shirt was seen on the surveillance images leaving the shrine after allegedly planting the bomb there on Aug 17. After he left the shrine and the bomb exploded, he took a motorcycle taxi to Silom.

A source said earlier that police are looking for another taxi driver who picked the suspect up from Silom Soi 9 after the explosion. Police have questioned about 15 taxi drivers whose vehicles appeared in CCTV footage around that time.

The Metropolitan Police Bureau has conceded that it is difficult to say whether the suspect is still in the country. According to the latest reports, the suspect possibly entered Chulalongkorn Hospital, changed his clothes and then fled the country to Malaysia.

Pol Gen Somyot said the police are missing some essential photographic evidence and therefore they might need to expand the scope of the investigation to fill in the gaps.

The police chief added it was fortunate the security cameras at the Dusit Thani Hotel captured images of the suspect, which showed him heading to Hua Lamphong train station.

However, Pol Gen Somyot said the investigation into the bombing is moving forward.

The BMA, meanwhile, declined to confirm if the 15 cameras were broken. Tripob Khantayaporn, director of the BMA's Traffic System Development Division, said the BMA operates security cameras throughout the city which are either directly connected to City Hall's central control panel or are stand-alone ones.

Images from the control panel-linked cameras are constantly monitored whereas the pictures taken by the stand-alone ones are reviewed every 15 days.

He said the cameras may not produce clear pictures because they are designed to see the surrounding areas from a certain vantage point, which is different from police-operated cameras which can zoom in on traffic offenders.

Mr Tripob added that the BMA has around 57,000 CCTV cameras in Bangkok. Of these, about 10,000 are new and capable of taking high-resolution pictures. 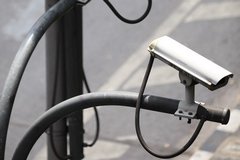 It looks like a CCTV camera. But is it working? Is it a dummy? Police now are plagued by fake and faulty cameras.

Also Monday, chemical analysis of blast residue found at the Erawan shrine has detected nitrite but it is not sufficient to identify the bomb type, a source in the MPB's explosive ordnance disposal unit said. The source told the Bangkok Post that nitrite is usually present in residue from C4 and TNT explosives so at this stage it cannot be determined if the device used in the Erawan bombing is C4 or TNT.

According to the source, the ball bearings used in the Erawan shrine and the Sathon pier explosions are from the same manufacturer. The ball bearings are about 6mm in diameter and are commonly found at hardware stores. "This type of bomb isn't commonly used in Thailand. The latest was the bomb in Sukhumvit Soi 71, but it is unlikely it was made by the same person. Their signatures are different," said the source.

A source at the Immigration Police Bureau also said intelligence reports from the National Security Council (NSC) indicate terrorists in Pakistan provide bomb-making training to various groups including Uighur extremists and insurgents in the deep South.

However, it cannot be verified if the Erawan shrine and Sathon pier bombs share any similarities with bombs constructed by terrorists in Pakistan as the components were too damaged for a thorough study.

MPB deputy commission Pol Maj Gen Charnthep Sesavej dismissed any connection between the Erawan shrine blast and the discovery of a MK2 grenade in Sukhumvit Soi 81. 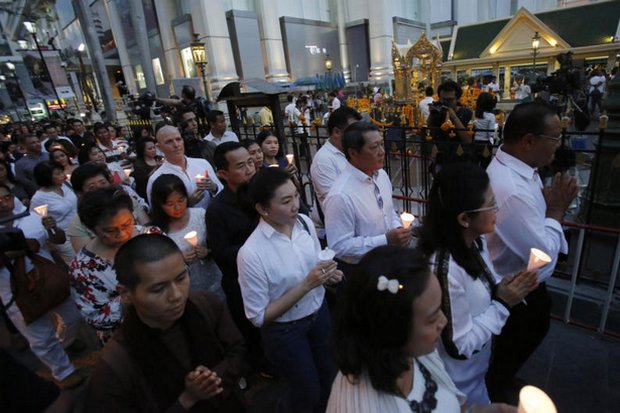 A candlelit vigil was held Monday evening, a week after the Erawan shrine bombing that killed 20 people, including 14 foreigners. (AP photo)

He said police are also investigating if there is any link between the blast and the hacking of six official websites by a group who claim to be an Islamic group from Tunisia.

Meanwhile, the National Council for Peace and Order said a total of 139 people have been arrested and a small amount of firearms and drugs confiscated in the Friday to Monday crackdown targeting tourist guesthouses and accommodations across the city.

The Justice Ministry and the Tourism and Sports Ministry have distributed financial support to the relatives of 16 of those killed in the bombing.

A total of 104 people have lodged petitions for financial aid. Out of the remaining injured, two people were discharged over the weekend, leaving the number of those being treated at various hospitals at 50.