Dancer in the light

Kanyanan Jittreenit, 33, one of the dancers of Damrong Thai Dance Drama crew.

Kanyanan Jittreenit performs traditional Thai dance for a living. It's a relatively safe job, unless you perform at the Erawan Shrine. Though rare, there are a few occupational hazards for <i>nang ram</i> -- female dancers -- at this world-famous, four-faced Lord Brahma shrine on the corner of Ratchaprasong intersection, a site of many political demonstrations and, most recently, a bomb attack.

The 33-year-old dancer was performing when the blast occurred last Monday. The dance crew survived with minor injuries.

For the past 14 years, Kanyanan has been dancing for the Damrong Thai Dance Drama crew, one of the four dance troupes stationed at Sarn Phra Prom -- as the shrine is known in Thai. Patrons hire beauties in sequinned costumes and glittering headpieces to dance for them as part of kae bon, or to fulfil their vows after Lord Brahma has granted them their wishes. 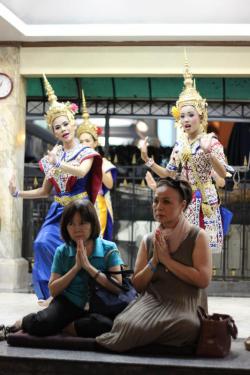 People pray at the shrine while dancers perform.

After the attack on Aug 17, which brought mayhem and turned the famed intersection into a scene of carnage, the shrine was closed off for a swift investigation and clean-up. While patrons were allowed back inside for prayers two days later, the dancing only resumed last Friday.

That day, Damrong crew was scheduled to come in for the night shift -- a harsh first day back as the haunting memory was still vivid in everyone's mind. Kanyanan only nodded when asked if she was scared to come back, but to her, backing out is not an option.

"This is my responsibility, my job. I can't and won't ask others to take the hit for me," said Kanyanan.

Last Friday, the dancer left her house in Ayutthaya, headed to Bangkok for her night performance. Deeming Bangkok a tough place to raise a family, Kanyanan relocated there four years ago. She now lives with her husband and three children, and commutes back and forth two to three times a week for her job.

Kanyanan has been with the Damrong crew since her first year in the College of Performing Arts at the age 19. She doesn't work anywhere else as the income from being a Phra Prom dancer is relatively high.

"This income allows me to raise a family and even supported me through school," she said, revealing that she usually makes around 2,000 baht a day -- tips included and taxes paid.

Having three kids posed no trouble for this job. Kanyanan was even dancing when she was pregnant (the costumes can be altered to suit a growing belly, to an extent). She only stopped after five months into pregnancy when she could no longer wear the traditional attire.

Kanyanan met up with other crew members in the dressing room in the Lan Luang area, where make-up and costumes are put on. The troupe has 14 dancers. Only eight dancers are required per day. 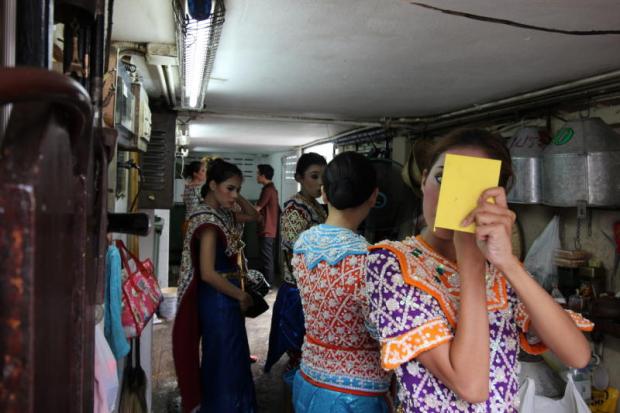 Preparing for the dance.

The Damrong Dance crew has been a fixture at the Erawan shrine for more than 20 years. It was selected by Than Tao Mahaprom Foundation Erawan Hotel -- the shrine's managing office -- since the early days to be one of the four crews dancing for Phra Prom. Each crew performs 15 days a month, switching between morning and night shift (8.30am–4.30pm and 4.30pm–10.30pm, respectively). Damrong crew only comes in on the odd-numbered days.

The crew is managed by Anuwat Panprayoon, 43, who took over the head position after his mother retired. The family business can be traced back for 60 years to his great-grandparents' days. Now, the crew dances mainly at the shrine, only performing somewhere else occasionally.

The crew's white van is ready to transport the dancers to Ratchaprasong. The group arrived dressed in colourful, sequinned costumes resembling male and female angels, minus their chada -- a golden headpiece. Kanyanan, in her dark blue and orange costume, was dressed as a male angel. During the van ride, some continued applying make-up while others napped. Thirty minutes later, the van stopped outside the Erawan shrine.

That afternoon the shrine, which was usually filled with vibrant tour groups, was nearly empty. Different banners hung on the fences -- RIP and "Stronger Together" -- while the aromatic cloud of joss sticks smoke was unusually thin.

Because of the blast, one of Phra Prom's four faces was chipped away, with half of one chin missing -- another stark reminder of the bomb's impact that can't be swiftly replaced like the tiles, metalwork and paintjob of the shrine (the Fine Art Department has already begun the repair work).

Joss sticks and flowers were distributed to the dancers and musicians. Each of the crew members walked around the statue, paying their respects to the four-faced god. 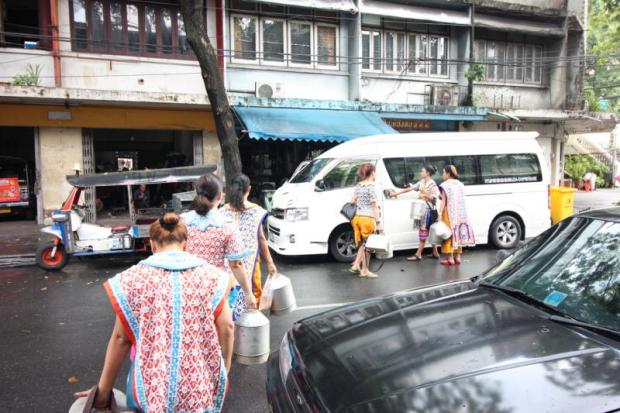 Dancers board the van which takes them to Ratchaprasong intersection.

The crew began their shift. There were four musicians -- one on taphon (barrel drum), another on ching (cymbals) and the other two on ranad (Thai xylophone). The dancers also sang along to each song. Their words melted into the Thai orchestra, creating a chanting resonance and sacred ambience befitting the holy shrine.

Tourists would approach the registration table and put their name down to hire the dancers. Once they've paid, the dancers were called out to perform. The patrons would then kneel on the cushion in front of the dancers, facing the statue and begin praying. At the end, many would hand generous tips to the dancers.

"A lot of patrons here are regulars. We could even recognise each other," said Kanyanan. "Some people come every year. They even showed us pictures that they took here the previous years. They are nice people."

Simple English words were exchanged between the dancers and patrons. There was not really a need to be fluent as the dancers rarely have time for a long conversation.

As it got darker, some passersby put down candles along the shrine's fence for the victims of the attack. Flowers were laid, sometimes with cards on them.

Normally, 7pm would be the busiest time of the day with tour groups coming in and Thai patrons getting off work. That Friday night was a quiet affair. Even so, the dancers went on performing. The ladies would get to sit down for a few minutes before they're up again. Two, four, six, or all eight -- the number depends on how many dancers each patron wants to hire. But even if only two dancers were performing, the rest of the crew continues singing from their seats behind the small orchestra.

"Sometimes, we dance over 100 rounds on each shift, shuffling between 10 songs on repeat," said Kanyanan. There is no allocated break time. The dancers can only eat or use the bathroom during the occasional free periods when nobody hires them for dancing. Free time is non-existent during high season or religious holidays.

The shrine staff started sweeping the flower petals off the ground. Normally, the dancers go on until 10.30pm, with the shrine closing its gate at 11pm. But on this first day back, the operating time was cut short by an hour.

After more than a decade of working here, Kanyanan said she only has seven years left as Phra Prom's dancer, since the age limit for dancers is set at 40. Kanyanan has been using her free time to learn more skills, saying she's looking into becoming a beautician when the inevitable departure comes.

"Most of the dancers are pretty artistic. They can offer services like sewing, or hair and make-up. Some also set up and lead their own dance crew," Kanyanan explained. 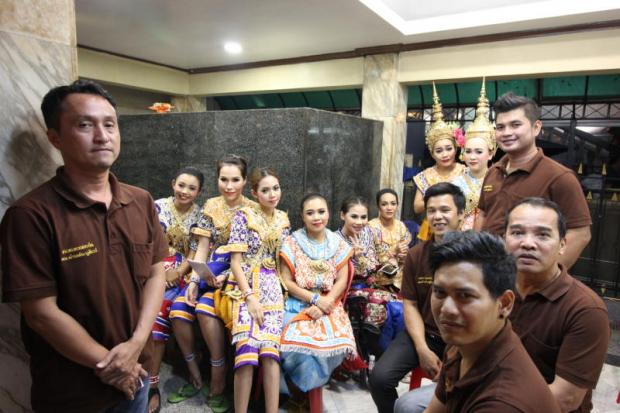 All eight dancers performed their last dance for the night. They started packing up, carefully storing their headpieces away. The atmosphere was relaxed as the night passed without any incident. Everyone was tired, but they are used to it.

The van was waiting to take them back to the dressing room to return their costumes and accessories. Afterward, Kanyanan would have to catch a bus, a van and meet her husband half way to take her home.

Kanyanan said that she's made a few wishes at the shrine before. When the crew's musician was in a fatal car accident, she prayed for him. On another occasion, she prayed for a child. Both of her wishes were granted, and she crawled around the statue 100 times. She explained that, as a dancer, she can't dance for the god as a vow fulfilment. So she opted for crawling.

The crew put up their hands to pay respect to Phra Prom before they leave the shrine. Though the situation was still far from normal, everyone was feeling optimistic. Kanyanan and Anuwat mutually agreed that people will keep coming back to the Erawan Shrine despite multiple tragic incidents.

"Deep down, they're still afraid. But they will be here," said Anuwat, the troupe's manager. "They still believe in Phra Prom. This is the power of faith."