A file photo on July 25, 2014, shows new tracks being built by the State Railway of Thailand from Aranyaprathet station to Ban Khlong Luek at the border with Cambodia. (Photo by Pattanapong Hirunard)

Thailand is hoping to resurrect a rail link with Cambodia to improve transport in the Mekong sub-region, Prime Minister Prayut Chan-o-cha said on Thursday.

The prime minister told visiting Cambodian Interior Minister Sar Kheng that Thailand was looking forward to seeing the tracks connecting the two countries restored to reopen the link through Cambodia to Vietnam.

The State Railway of Thailand was rehabilitating the six kilometres of track from Aranyaprathet station in Sa Kaeo province to the border at Ban Khlong Luek, opposite Poipet town. Work is expected to finish by the end of this year. 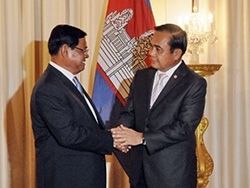 Cambodia, meanwhile, is rebuilding the line from Sisophon to Poipet.

The railway connection between Aranyaprathet and Sisophon stopped in the 1970s due to internal conflicts in Cambodia.

Gen Prayut said the train link will help plans to develop special economic zones between the two countries and benefit the Dawei deepsea port in the future.

Sar Kheng is in Bangkok to attend a meeting of Thai and Cambodian governors which runs through Friday to build up cooperation between their border provinces.